Not a word of French is spoken in Claire Denis’ languid thriller “Stars at Noon,” but the voice that rings out is crystal clear. On paper (and the film is adapted from Denis Johnson’s 1984 book), the project seems cut from similar cloth to a paranoid New Hollywood potboiler, draping games of cat and mouse with a geopolitical sash.

On screen, the film would just as soon do away with dress altogether, replacing the thrill of the chase with thrills of the flesh — and with a number of other illicit activities as well. The walls are closing in around our beleaguered leads, so they might as well pour a drink, light up a smoke, and enjoy that even closer proximity.

Marking her return to the Cannes competition for the first time in more than 30 years, Denis brings a Central America–set, English-language title with Gallic DNA. It follows Trish (Margaret Qualley, whose silent-film star eyes always keep our attention even her dialogue gets wonky), a disaffected twenty-something who would tell you she’s a journalist, though another character describes her as a  “North American prostitute drifter who drinks like an Apache.” 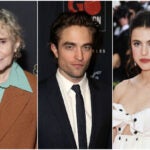 Also Read:
A24 Nabs Claire Denis’ ‘The Stars at Noon’ With Robert Pattinson and Margaret Qualley

The truth is somewhere in the murky middle (except for the boozing — that’s pretty clear). Trish was reporting on war crimes in northern Nicaragua before the local authorities confiscated her passport and converted her greenbacks into useless córdoba; at the same time, she’s secured lodging at a dingy hotel and leases her press card, using her body as payment. Stuck in place with — to crib from another master of ennui — no exit in sight, Trish follows society’s one role for young women in trouble, turning tricks for beer money and turning to drink to pass the endless time.

At the swanky hotel where she stakes out her prey, she meets and beds Daniel (Joe Alwyn), a suave British oilman with a wife back home and special forces on his tail. If the parameters of their relationship are initially clear, the spark that lights between them confounds them both.  While both actors are remarkably game, showing little bashfulness as the filmmaker explores their frames with her typical curiosity, they don’t always sell the heat that’s supposed to fuse these two bodies together. 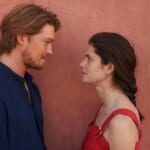 Also Read:
‘Conversations With Friends': Joe Alwyn and Alison Oliver on the Power Dynamics of Their Love Affair

Chilliness is the name of the game here, even in the swelter of Nicaragua. Once Costa Rican G-men step up their pursuit — there is some matter of a SIM card with stolen information, but you know how these MacGuffins go — the pair set off on a chase unlike most others. Looking to lose an agent on their tale, Trish and Daniel embark on a daytime binge, stumbling through taxis and alleyways and open-air markets as they try to shake his tail. Pairing the action on screen with another frosty Tindersticks score, all low notes and single wailing horn, the filmmaker swaps tension for the bleariness of being day-drunk in a humid climate. With nowhere to run, the only escape is from reality.

Though the original text was set in the 1980s and the project sat on Denis’ docket for years, the filmmaker had the good luck to shoot at a bad time. Fully embracing our pandemic age, “Stars at Noon” uses masks as discreet visual elements and COVID checks (which fill the words “let me see your papers” with new and modern menace) as full-on narrative devices. When Denis films the young lovers walking with faces free in a sea of masks, she can isolate the pair from the world around them while evoking a darker and wider context that’s not merely linked to the pandemic. 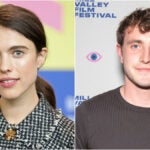 Also Read:
Margaret Qualley to Star, Paul Mescal in Talks for Love Story ‘The End of Getting Lost’ at Amazon

For all their troubles, these are a privileged pair. So how better to comment on the pitfalls of using two alabaster movie stars to traipse across an often unexplored context than by finding a visual to do that very work? Both Trish and Daniel might view their open-air prison as a purgatory of sorts, finding love in a hopeless place just to pass the time, while the locals don’t have the benefit of abstraction.  Nor do they have the benefit of Uncle Sam.

As the film around her picks up its lilting pace, Trish never loses her sangfroid. Characters in such thrillers rarely carry themselves with a similar degree of self-assurance, but then, maybe they don’t have the same degree of self-awareness. The girl is, after all, young and beautiful and white and American; while the net tightens around her, a bigger fish swims not so far away. Though Qualley contains and conveys all this information just in her performance, Denis’ script (co-written with Andrew Litvack and Léa Mysius) can also belabor the point in less than subtle ways, especially by the time Benny Safdie shows up playing either a CIA agent or private consultant, but an agent of empire all the same.

Through bursts of stilted dialogue, Denis’ tonal control never does let up. When chewing through some oddly phrased text, Qualley’s non-verbal tics offer twice the information with half the winces, making “Stars at Noon” sometimes feel like two films in one.  There’s the paranoid thriller and the dreamlike dirge; a steamy drama and its feminist reappraisal; the work of a master with the promise of new kinks to iron out and maybe greater heights to which to soar.

“Stars at Noon” makes its world premiere at the 2022 Cannes Film Festival and has been acquired for U.S. release by A24.