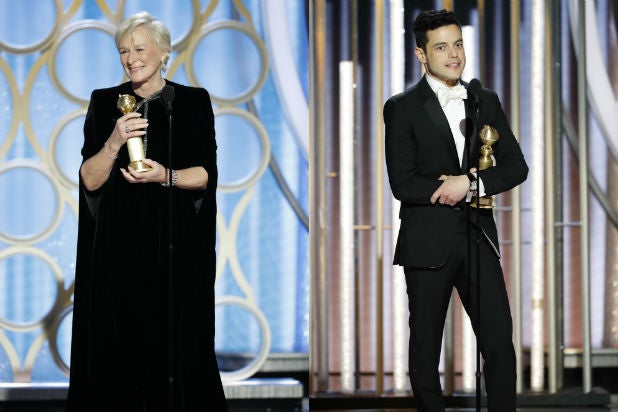 For about three hours and five minutes on Sunday night, the 76th Annual Golden Globes ceremony was making a pretty good case that the Globes are a lot more interesting when they’re about politics or movements — or, really, anything but awards.

It was a pretty mundane Golden Globes show, until the moment when Gary Oldman opened the envelope for Best Actress in a Motion Picture – Drama, and didn’t read the name of Lady Gaga.

Instead, Glenn Close was the winner for “The Wife,” an indie film from Sony Classics that has been seen by a fraction of the audience for Lady Gaga’s performance in “A Star Is Born.” It was the biggest shock of the night — hell, the biggest shock in a few years at the Globes — and it led to an outpouring of emotion and a rousing speech that may actually put Close in the center of the best-actress conversation from now on, rather than on the periphery.

Also Read: Golden Globes Winners by the Numbers: 'Green Book' Is the Story of 2019

After all, she’s never won an Oscar despite a brilliant four-decade career – and after Sunday, who wouldn’t want to see her on the stage of the Dolby Theatre in February?

Close’s win was something rare at the Globes: a victory that has the potential to change awards season. And it gave the show a sense that something had actually happened.

The moment was followed by Rami Malek’s passionate speech after he won the drama-actor award for playing Freddie Mercury in “Bohemian Rhapsody,” and then by “BoRap” upsetting “A Star Is Born” in the Best Motion Picture – Drama category. Awards season suddenly turned upside down.

Could Malek win an Oscar, too? (Yes, he could.) Could “Bohemian Rhapsody” be a true contender to win Best Picture? (Let’s not get ahead of ourselves — it’ll have to get nominated first, and that’s not a sure thing at all, even now.)

Also Read: Patricia Arquette Apologizes for F-Words That Got Her Bleeped During Golden Globes Acceptance Speech

It was a weird, delicious, baffling ending to what had been a fairly mundane Golden Globes show, a blast of unexpectedness that shows that the Hollywood Foreign Press Association is as odd as ever.

And it gave a badly needed jolt to a show that had until then seemed far less vital and purposeful than last year’s Globes, in which the birth of the #TimesUp movement turned the show into a black-clad statement of purpose, or the 2017 show, when a fiery anti-Donald Trump speech by Meryl Streep galvanized the room and overshadowed a record number of wins by “La La Land.”

This year’s Globes gave us a pair of subdued hosts in Andy Samberg and Sandra Oh, a decent joke about the Oscars hosting situation, a few political comments, some expected winners, a handful of minor upsets and, for more than three hours, not much else.

Apart from the jolt of Glenn Close and “Bohemian Rhapsody,” the difference in this show was perhaps epitomized in this year’s Cecil B. DeMille Award recipient, Jeff Bridges. His two predecessors in winning that award, Streep and Oprah Winfrey, raised the roof with their cries for change.

Bridges, in the way that we’ve all come to love, was goofy and endearing and as cosmic as his “Big Lebowski” character, the Dude, as he gave Buckminster Fuller what was probably his first-ever awards-show shout-out and then compared everybody in the room to the little rudders that help big rudders turn oil tankers.

“We can turn this ship toward the way we want to gooooo, man!” he said, beaming. “Toward love!”

Also Read: Regina King Vows All Her Projects Will Be 50 Percent Female

So that was this year’s Golden Globes. Like Bridges, Samberg and Oh tried to steer things toward love in their snark-free opening monologue, and then the HFPA handed out more dollops of love for about three hours, ending with the unexpected ones.

But while Glenn Close and “Bohemian Rhapsody” came out as the big winners and “A Star Is Born” took a hit on a night it was expected to dominate, most of the top Oscar contenders did what they needed to do.

“Roma,” which wasn’t eligible in the best-picture categories because it’s in Spanish, won the foreign-language film award and also, crucially, took the Best Director Globe. “Green Book” won an expected award for supporting actor Mahershala Ali, added a slightly surprising one for its screenplay and then took the big one, Best Motion Picture – Musical or Comedy.

And the two films that lost to “Green Book” in that category, “Vice” and “The Favourite,” did what they needed to do — winning top acting awards for Christian Bale and Olivia Colman — even if they didn’t do as well as their creators would have liked.

Colman in particular came in as an unknown quantity to too many voters — but she was so endearing and sassy in her acceptance speech that she essentially delivered a promise that nobody will regret voting for her over the next few weeks.

On the drama side — classifications are fluid at the Golden Globes — “A Star Is Born” was the night’s biggest flop, though it did win the Best Original Song award, and “Bohemian Rhapsody” the biggest winner. But Barry Jenkins’ lyrical “If Beale Street Could Talk” stayed in the game courtesy of a supporting-actress win from Regina King.

The view from this corner is that Close’s award has the potential to be an actual game-changer, that Rami Malek is a serious contender to win the Oscar, and that “Bohemian Rhapsody” will go down as one of those oddball HFPA choices that only grows more baffling in retrospect.

But let’s give the voters credit: They shook things up on Sunday night, and a free-for-all of an awards season is even wilder now than it was before.