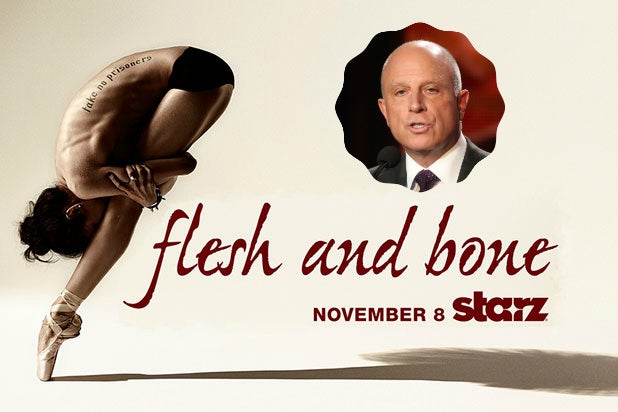 “Flesh and Bone” apparently costs an arm and a leg.

Season 1 of the upcoming Starz show proved to be more expensive than the premium TV channel’s typical limited-run series, and even on par with pricey undertaking “Black Sails.” Cost, logistics and creative challenges proved so taxing that Starz changed courses and elected to make “Flesh and Bone” a limited-run series as opposed to a standard seasonal one. The switcheroo topic was a hot one on Thursday’s Starz earnings call, which followed the company’s release of strong first quarter financials, driving stock STRZA to an all-time high.

The dancing drama is so pricey, in fact, that it will increase programming costs in this year’s fourth quarter beyond what CEO Chris Albrecht considers to be his model going forward.

“This is an out of ordinary event for us to have created a series and then decided that it just was not sustainable on a seasonal basis,” Albrecht explained. “[We] still felt we wanted to get it in there.”

“As part of our ramp-up, from time to time these things happen,” he added. “Everything doesn’t always turn out the way you thought.”

When pushed for a little more clarity on the lack of sustainability, Albrecht stated that the show is “very ambitious,” expressing that it was “not one or the other” in terms of the decision being neither solely a creative or financial issue.

All that said, the channel’s chief praised the dancing drama’s creator, Moira Walley-Beckett (“Breaking Bad”), saying he “will not at all be surprised if she’s standing on the awards stages accepting [trophies]” for the effort.