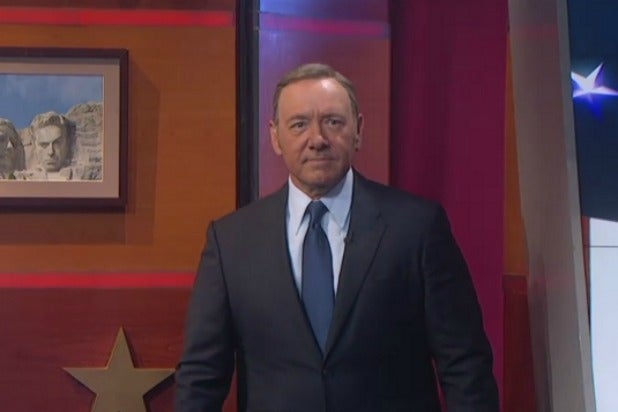 Stephen Colbert says he may move to Washington, D.C. when his show ends — and “House of Cards” president Frank Underwood already has a welcome in mind.

Kevin Spacey appeared in character as Underwood on Wednesday’s Colbert report, in which Colbert –who like Underwood is a South Carolina native — considered his future.

“You’ve proven that a charming South Carolinian can rise quickly in Washington, D.C.,” said Colbert. “Maybe I’ll head down there.”

Underwood offered to take Colbert under his wing, offering an invitation that will sound more than a little unnerving to “House of Cards” fans.

“Take the last train down,” he said. “I’ll meet you on the edge of the platform.”

Not to put to fine a point on it, he elaborated: “And Stephen, for reasons of security, if anyone asks where you’re going, just say, ‘to commit suicide.'”

The real Colbert, of course, will begin hosting CBS’s “The Late Show” next year, after “The Colbert Report” ends in December. The fake Colbert — the conservative blowhard character he plays on the Comedy Central show — won’t be coming along.

Underwood appeared on “The Colbert Report” after Colbert joined the many pundits who have wondered how Underwood would handle the radical group known as ISIS or ISIL. He noted that President Obama has refused to declare war, and bluntly told reporters the U.S. doesn’t yet have a strategy for dealing with the group.

“So what?” said Colbert. “No strategy was our strategy the last time we started a war. … No surprise, folks: Professor Plans-a-Lot is overthinking this whole killing-people thing.”