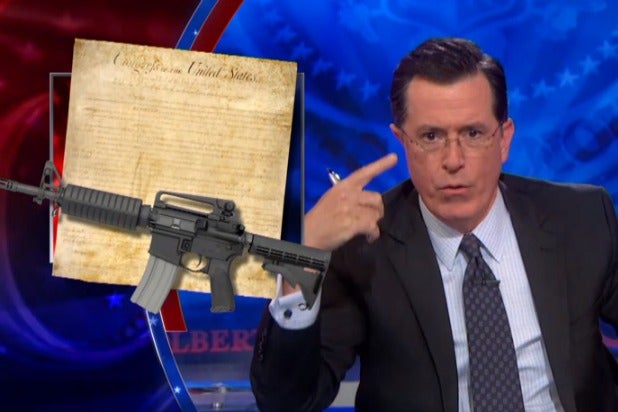 Stephen Colbert says the “liberal wackos” at the National Rifle Association have turned their backs on people who want to bring their guns to fast food restaurants.

After open-carry activists brought their guns into a Chipotle last month, the chain and several others asked customers not to bring weapons to lunch.

“It’s a Domino effect,” Colbert said on “The Colbert Report” Tuesday. “Oh God, I just hope this doesn’t spread to Domino’s. I really like to have a gun on hand after I eat one because I feel like killing myself.”

Colbert said the restaurants’ anti-gun policies were forcing Americans to choose “between high-powered weaponry and fried food. Both are deadly but only one comes with melted cheese.”

Rather than coming to the defense of gun and fast food enthusiasts, the NRA said on its website that it, too, found it strange that anyone would bring a gun to the burrito line.

“Let’s not mince words, not only is it rare, it’s downright weird,” the group said.

Colbert was appalled, and so were members of the Texas group behind the Chipotle demonstration. It has threatened to pull its support of the NRA over the “disgusting and disrespectful comments.”

“By not unconditionally supporting these men, the NRA is stabbing all gun lovers in the back — when it should be shooting us in the front,” Colbert said.