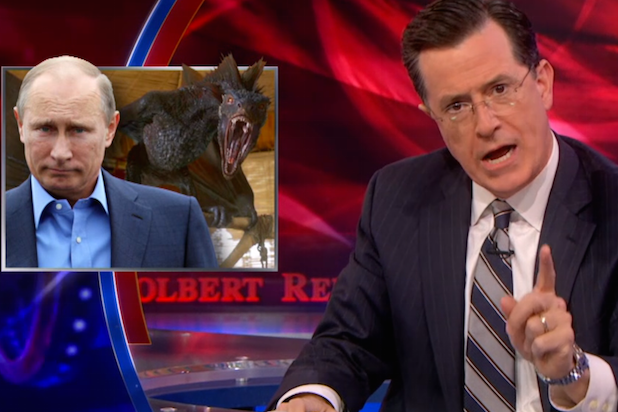 Americans can’t seem to find the Ukraine on a map, and despite a geopolitical crisis currently roiling the Eastern European nation, Stephen Colbert is having difficulty even locating its position in reality.

“The Colbert Report” host was quick to call for America to take up arms against Russian leader Vladimir Putin’s attempts to break off a piece of Crimea and bring it under his country’s umbrella.

The only problem is he seems to be confusing the crisis with a popular HBO program.

“Folks we have got to invade before Putin’s slave army vanquishes all of Europe on his way to Westeros,” Colbert said. “Full disclosure: I may have been flipping between Fox News and ‘Game of Thrones’ the other night.”

Colbert isn’t the only person who is confused. A new Washington Post poll revealed that a mere one out of six Americans know where the Ukraine is located, with many respondents postulating that it can be found anywhere from the Indian Ocean to the continental United States. That set off Colbert’s inner conspiracy theorist.

“Most alarming of all, there’s some Ukraine in Iowa, which means it’s only a matter of time before Vladimir Putin invades and then wins the GOP straw poll with dragons,” Colbert predicted.