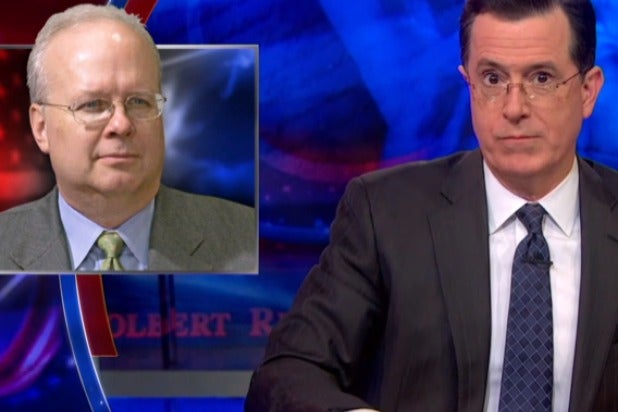 Does Bush’s Brain have a brain injury?

Stephen Colbert is asking the question about Republican strategist Karl Rove, dubbed “Bush’s Brain” because of the counsel he provided the former president. Rove recently expressed concern about the health of potential 2016 presidential candidate Hillary Clinton, saying she had recently spent 30 days in the hospital.

“And when she reappears, she’s wearing glasses that are only for people who have traumatic brain injury? We need to know what’s up with that,” Rove said.

But Colbert notes that Clinton was treated for just three days for a concussion. Not 30 days.

“Has Karl Rove lost track of time because he has a serious brain injury?” Colbert asked on Thursday’s “Colbert Report. “I’m just asking the question. I mean, for some reason he is protecting his skull with a thick cushion of meat.”

Of course, Rove is also just asking a question. He was rewarded with dozens of news stories about whether his question was silly — but in the process he got some coverage for something that had never been an issue before.

“Karl’s only bringing this up because the media is going to make an issue of it anyway,” Colbert said. “I mean, just look at how much they’ve been making it an issue since Karl brought it up.”