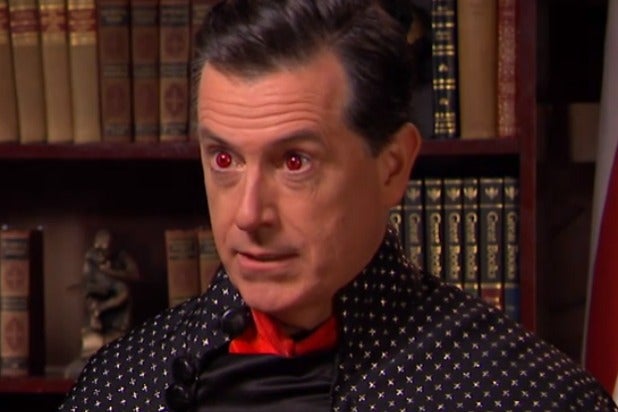 Stephen Colbert prepped for his interview with Florida congressional candidate Jake Rush by donning a cape and red contact lenses.

“Thank you for joining me here so close to midnight — the witching hour,” he told Rush.

Colbert dressed up because Rush gained unwanted attention during his Republican primary race when pictures of him in vampire gaming attire circulated online. Rush’s opponent called his practices “disturbing.”

“Are we not – why aren’t you in character? I thought we were gonna role-play,” Colbert asked.

“No, Stephen,” said Rush, who went on to explain that he is running to end Washington hypocrisy.

“Sir, for the record: Are you a vampire?” asked Colbert.

Rush gave an unequivocal “No.”

Rush has said that besides once dressing as a vampire, he has also played George Washington and Jesus in school plays.

“How has it been for you as a Republican to be an open thespian?” Colbert asked. He also got Rush to say that he believes in thespian marriage.

Then the interview took its first odd turn, as Colbert began talking with his gun.