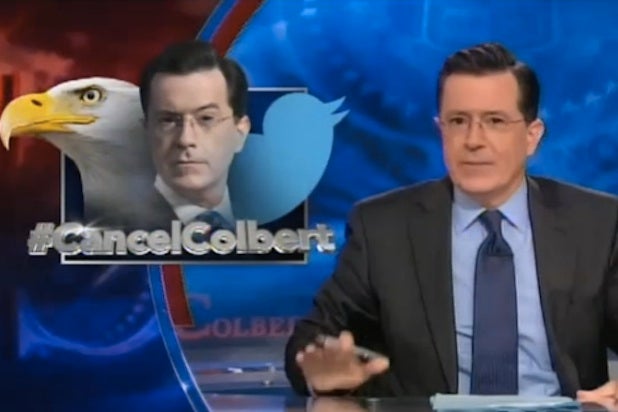 Stephen Colbert triumphantly returned Monday night to answer critics who created the viral hashtag #CancelColbert over a controversial @ColbertReport tweet that took one of his jokes out of context.

“…The interwebs tried to swallow me whole,” Colbert said. “But I am proud to say that I got lodged in its throat and it hacked me back up like a hastily chewed chicken wing!”

“The dark forces trying to silence my message of core conservative principles mixed with youth-friendly product placement have been thwarted!” Colbert exclaimed to cheers.

Colbert humorously acknowledged it was a close call.

“Folks, I’m not gonna lie, we almost lost me,” Colbert conceded. “I’m never going to take me for granted ever again.”

The Comedy Central controlled Twitter account, @ColbertReport, tweeted a joke he made on his show absent any context or video: “I am willing to show #Asian community I care by introducing the Ching-Chong Ding-Dong Foundation for Sensitivity to Orientals or Whatever.”

“Who would have thought a means of communication limited to 140 characters would ever create misunderstandings?” he asked.

Colbert told fans to back off attacking the activist who created the #CancelColbert hashtag.

“If anyone is doing that for me, I want you to stop right now,” he said. “She’s just speaking her mind. That’s what Twitter’s for, as well as ruining the ending of every show I haven’t watched yet.”

Colbert also hit back at people who still thought he was racist beyond the tweet faux pas.

“Now, the Cancel Colbert people think that even in context, I’m a racist,” Colbert explained. “I just want to say that I’m not a racist. I don’t even see race. Not even my own. People tell me I’m white and I believe them because I just devoted six minutes to explaining how I’m not a racist!”

Later in the program, Colbert, with the help of Twitter co-founder Biz Stone, deleted @ColbertReport once and for all.

Watch Colbert respond to the controversy below: