Stephen Sondheim, the legendary Broadway composer and lyricist who died Friday at age 91, rewrote — and recorded — his own dialogue for a scene in Lin-Manuel Miranda’s “Tick, Tick… Boom!”

“When I screened the movie for Sondheim, he e-mailed me and said, ‘You treated me very gently and royally, for which I am grateful,” Miranda said in an interview with the New Yorker. “But he said, ‘One thing: the last voice-mail message to Jon, it sounds a little cliché. ‘I have a feeling you’re going to have a very bright future.’ I would never say that. Can I please rewrite what Sondheim says in the voice mail? I’ll record it if you can’t get the actor back.’ ”

Sondheim, in perhaps one of his last artistic acts, recorded the dialogue for the scene.

“I’m not turning down a Sondheim rewrite!” Miranda said. 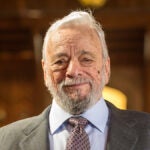 “It’s first-rate work and has a future, and so do you. I’ll call you later with some thoughts, if that’s OK. Meanwhile, be proud.” Soundheim said in the scene.

During his long career, Sondheim earned eight Tony Awards, eight Grammy Awards and an Oscar for a song he wrote for the 1990 film “Dick Tracy” performed by pop star Madonna, “Sooner or Later (I Always Get My Man).”

Later in life, he became an influential mentor to a generation of younger Broadway composers, including Adam Guettel (“The Light in the Piazza”), Lin-Manuel Miranda (“Hamilton”) and Jonathan Larson (“Rent”).