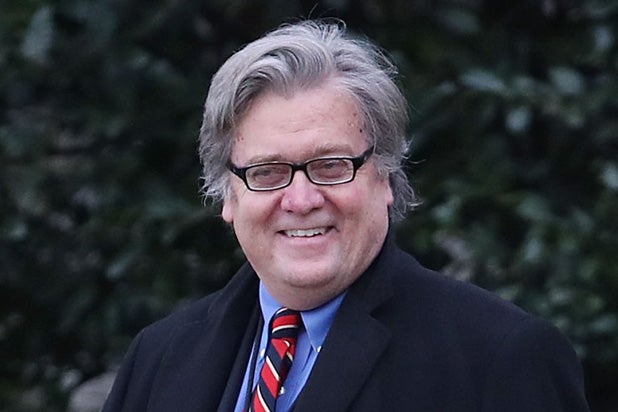 White House Chief Strategist Steve Bannon is almost certainly not friends with Anthony Scaramucci, but he has at least one thing in common with the man who infamously accused him of self-fellating: he doesn’t understand what a journalist does.

In the wake of Donald Trump’s disastrous press conference Tuesday, there was a dramatic spike in calls for Bannon to be fired. Bannon has after all been seen as the link between Trump and the white nationalist movement that adores him. He’s even been criticized by members of the Republican party.

And yet, for some reason, in the middle of all that, Bannon called up Robert Kuttner of the liberal magazine The American Prospect, and delivered an on the record series of comments almost as unbelievable, and career-sabotaging, as the one that made Scaramucci infamous (and probably got him fired) just two weeks ago.

“Bannon was in high spirits when he phoned me Tuesday afternoon to discuss the politics of taking a harder line with China,” says Kuttner, “and minced no words describing his efforts to neutralize his rivals at the Departments of Defense, State, and Treasury. ‘They’re wetting themselves,’ he said, proceeding to detail how he would oust some of his opponents at State and Defense.”

It gets weirder from there. Bannon lamented U.S. foreign policy frequently, and most notably, he even rebutted his own boss’ recent “Fire and Fury” bluster regarding North Korea.

Kuttner says Bannon “went on to describe his battle inside the administration to take a harder line on China trade, and not to fall into a trap of wishful thinking in which complaints against China’s trade practices now had to take a backseat to the hope that China, as honest broker, would help restrain Kim.”

Suffice to say, on both points, Bannon directly contradicts Trump’s own stated policies and goals. Bannon wasn’t done though. In addition to insulting his competitors in the White House and his boss’ plans, he also threw the alt-right and white nationalists aside. “Ethno-nationalism–it’s losers. It’s a fringe element,” Kuttner says Bannon told him. “I think the media plays it up too much, and we gotta help crush it, you know, uh, help crush it more.”

“These guys are a collection of clowns.”

Unsurprisingly, since the Prospect article was published Wednesday, Bannon has been the subject of rumors and intense criticism, especially from Republicans and other right wing actors. He’s been criticized for everything from insulting fellow Republicans to undermining National security. And his defense? He didn’t know he was on the record when he called a prominent journalist and failed to tell him the conversation was off the record.

According to Axios, Bannon is telling associates that “he never intended to do an “interview” with an editor at the American Prospect, a left-wing publication.”

Bannon admired Kuttner’s stance on China, and called him to talk informally about the issue, but “apparently never thought that the journalist might take his (very newsworthy) comments and turn them into a story.”

In other words, it looks almost literally like the same situation that Anthony Scaramucci found himself in.