“I’m not working for Bannon,” publicist Maria Sliwa told TheWrap in a brief interview. “I have a client who is.”

We’ve finally learned who that client is: a PR company founded and led by Alexandra Preate, who says in her Twitter bio that she is a spokesman for Bannon and for Bannon’s former employer, Breitbart News. 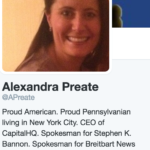 Sliwa continues to say she does not work for Bannon — because technically speaking, she works for someone who works for Bannon.

“Steve Bannon is not my client, nor is Breitbart. If they were, I would not be afraid to say so,” she wrote in a Facebook post Saturday, responding to TheWrap’s story last week.

Bannon excels at pushing his agenda in the news media in ways that don’t leave his fingerprints, as this Bloomberg story details. He needed a PR boost because of negative stories containing accusations of racism, sexism and anti-Semitism.

As TheWrap’s story noted last week, it is not unusual for prominent people to hire publicists, or to seek positive stories. But it is unusual for publicists to refuse to say who they work for. (The Public Relations Society of America’s code of ethics says publicists should “reveal the sponsors for causes and interests represented.”)

And now, a quick quick heads up: We’re about to go pretty deep into the weeds about Sliwa’s employment, and she said in a phone call with TheWrap on Monday that she considers our coverage of her to be “a witch hunt.”

In her bio for her PR firm, M. Sliwa Public Relations, she says she is the president of that company and another company, Freedom Now Communications, Inc. The website of Capital HQ, of which Preate is CEO, lists Sliwa as media director. (As of this writing, Sliwa does not mention Capital HQ in the bio posted on her own firm’s site.)

Last week, Sliwa sent two e-mail pitches to reporters offering interviews with two men who would say nice things about Bannon. (One of those two men quickly landed in a PR crisis of his own, but that’s another story.)

Also Read: Steve Bannon Defender Lands in PR Crisis of His Own With 'Internment' Comments (Video)

The signatures of the two emails identify Sliwa as a media contact for reporters interested in interviews, and give her title and contact information at Capital HQ. They do not indicate that Capital HQ is her client.

A call to Capital HQ was not immediately returned on Monday.

“My disclosure responsibility was fulfilled when I indicated my client’s name and full contact info at the bottom of my pitch. Molloy did admit that I told him on the phone that my client is another PR company. He knew this, and knew that his article would have lost its potency if he displayed the full version of my pitch for his readers,” she wrote, referring to the writer of last week’s story and this one. (Hi.)

In actuality, in our initial phone call with Sliwa last week, she did not say her client was “another PR company,” only that she had “a client” working for Bannon. (Her full quote is in the second paragraph of this story, above.)

Sliwa also complained in her Facebook post that TheWrap’s initial story did not reprint her pitches in their entirety. You can read the pitches here and here.

In an interview with The Hollywood Reporter published Friday, Bannon said he is not a white nationalist.

“I’m not a white nationalist, I’m a nationalist. I’m an economic nationalist,” he told the entertainment trade publication.

5 Major Trump Stories You Missed in the 'Hamilton' Distraction (Photos)

”Don’t let Trump bury his fraud case with this Hamilton noise. This is what he does every damn time“

By now you probably know every detail of Donald Trump's fight with the cast of Broadway's "Hamilton" -- but you may not have heard about all the serious stories it overshadowed this weekend. Here are five of them.