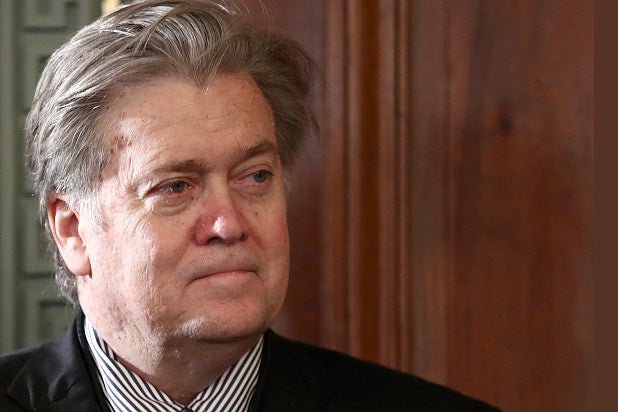 After departing from his role at the White House, Steve Bannon said on Friday he’d return to Breitbart News and will go to “war for Trump against his opponents.”

“Just got off the phone w/ Bannon: ‘If there’s any confusion out there, let me clear it up: I’m leaving the White House and going to war for Trump against his opponents — on Capitol Hill, in the media, and in corporate America,” Bloomberg Businessweek reporter Joshua Green tweeted.

Green also confirmed that Bannon’s return to Breitbart would be effective immediately, with Bannon “chairing tonight’s editorial call” for the conservative media outlet.

Steve Bannon just went on the record with me about his next move (story breaking now on @TheTerminal and @bw): pic.twitter.com/EDPULg25VR

Green is the author of the book “Devil’s Bargain: Steve Bannon, Donald Trump, and the Storming of the Presidency,” which documents Bannon’s relationship with Donald Trump throughout the 2016 campaign.

The news contradicts previous media reports which stated that Bannon had been plotting a “war against Trump” following his ouster from the president’s administration.

Earlier in the day, an Axios report citing a “source familiar with Breitbart’s operations” said Bannon planned to “go ‘thermonuclear’ against ‘globalists’ that Bannon and his friends believe are ruining the Trump administration, and by extension, America.”

Bannon’s departure came nearly a year to the day after he signed on as chairman to Trump’s 2016 presidential campaign. It remains unclear whether he was forced out by Trump or stepped down of his own volition.

“White House Chief of Staff John Kelly and Steve Bannon have mutually agreed today would be Steve’s last day. We are grateful for his service and wish him the best,” the White House said in a statement on Friday.