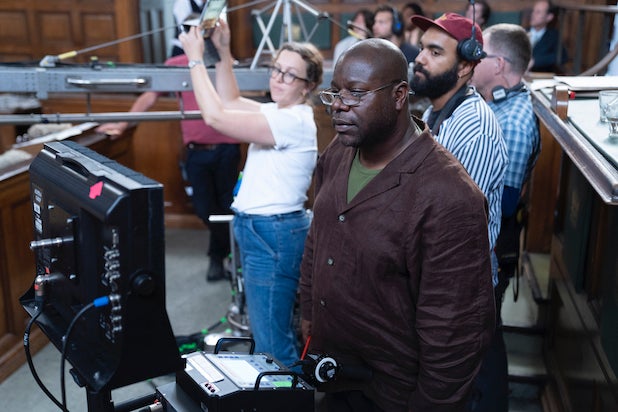 Steve McQueen’s “Lovers Rock,” one of five movies in the director’s “Small Axe” anthology on Amazon, is a dreamy, sensual fantasia of a film, a 68-minute evocation of one Saturday night at a dance party in 1980 London. The story follows Martha (newcomer Amarah-Jae St. Aubyn) as she sneaks out from her family home to attend “Blues Night” at a house in London’s West Indies community that’s been transformed into one big reggae dance floor.

In the peak scene, she dances with a young man she’s met (Micheal Ward) to the rhythm of Janet Kay’s silky “Silly Games.” And when the music stops, the crowd keeps singing, entranced by the fevered bliss of the song.

McQueen has focused on the Black experience in all of the “Small Axe” films. Several of them depict real events: “Mangrove” is a courtroom drama and “Red, White and Blue” tells the story of a Black police officer joining a virtually all-white force. “Lovers Rock,” which takes its name from a romantic style of reggae music popular in the 1970s, is more of a mood piece.

But the director had to make it and the other “Small Axe” films without one of his key collaborators. Sean Bobbitt has photographed all of McQueen’s feature films (“Hunger,” “Shame,” “12 Years a Slave” and “Widows,”), plus numerous shorts and television projects. Due to a scheduling commitment, he was not available for “Small Axe.”

“Sean was unfortunately busy,” McQueen told TheWrap. “But at the same time, I felt fortunate to give another cinematographer a big opportunity.” McQueen watched the clip reel of Shabier Kirchner, whose recent credits include the romantic drama “Only You” and the NYC-set “Skate Kitchen.”

“I just loved the idea, in a way, that he was somewhat newer to the game,” McQueen said. “There was so much potential in his work for all the other things he could do.”

Once he hired Kirchner, McQueen introduced his new collaborator to his old one. “I got Sean and Shabier together, and they spoke for a while. Sean kind of proved Shabier up, as such, and they talked a lot about shooting in London. This would be Shabier’s first time shooting in London, though he had made a film in Scotland.”

Kirchner grew up on the Caribbean island of Antigua and in 2017, directed a short film about the island called “Dadli.”

“Shabier is from the West Indies himself,” McQueen said. “And so, to a certain extent, what’s happening in front of the camera is also happening behind the camera. What I mean by that is Shabier understands the culture, understands the environment. The actors in ‘Lovers Rock,’ they see a Black cinematographer, they see a Black director. And during these dance sequences, which are depicting Black folks being themselves among each other, there was no sort of observer. We were invited to the party.”

That truism is illustrated later in “Lovers Rock,” as the film contrasts the “Silly Games” dance sequence with a more intense and masculine scene featuring more than a dozen men seemingly possessed as they dubstep to the Revolutionaries’ “Kunta Kinte.”

With the men’s limbs flailing in all directions and shots lasting for two or three minutes without a cut, a McQueen signature, the cinematographer indeed needed to be immersed in the dance action. “Shabier is a skater and he is a sailor,” McQueen raved. “He has an amazing center of gravity and a sense of balance. So therefore in these sequences where he, as the DP, was right there in the dance, he’s got some of the best hands ever. So that’s what it is. That’s what he’s got.”

“Lovers Rock” is available on Amazon Prime. An extensive interview with Steve McQueen about “Small Axe” will appear in the December issue of TheWrap’s print magazine.