Steven Spielberg’s “The Fabelmans” is the latest film that will make its world premiere at the 47th annual Toronto International Film Festival.

Spielberg’s deeply personal story joins a TIFF lineup that already includes premieres such as “The Woman King,” “Glass Onion,” “Bros,” “On the Come Up” and “My Policeman.”

Michelle Williams, Paul Dano and Seth Rogen star in the 20th Century coming-of-age story that’s inspired by Spielberg’s own childhood about a young man’s discovery of a shattering family secret and an exploration of the power of movies to help us see the truth about each other and ourselves. 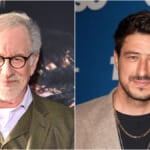 Gabriel LaBelle, Jeannie Berlin, Julia Butters, Robin Bartlett, Keeley Karsten and Judd Hirsch round out the cast. Tony Kushner, the famed playwright who worked with Spielberg on the “West Side Story” remake, co-wrote the screenplay with Spielberg.

No images or first looks at this one yet, but Universal has set a release date for Nov. 23, 2022 for “The Fabelmans.”