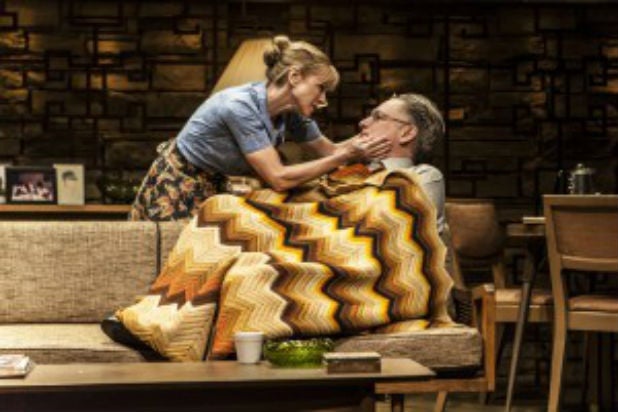 Watching the New Group’s tough, horrifyingly funny revival of David Rabe’s “Sticks and Bones” is like entering an eerie time capsule. The Vietnam-era play, which opened Thursday at the Pershing Square Signature Center, dates back to its professional world premiere in 1971.

A soldier named David, having been blinded in battle, comes home from the war, and is greeted by his parents, Ozzie and Harriet, and younger brother Rick. The “Adventures of Ozzie and Harriet” references are indeed quaint, but that’s not the truly jolting thing about seeing Rabe’s play in 2014, post so many other wars.

The jolt derives from how much “the outsider” has changed over the years. In Ayad Akhtar’s “Disgraced” and Sarah Ruhl’s “The Oldest Boy,” two new plays now on the boards in New York City, it’s the white characters that have to make the excuses for being different, dense, xenophobic.

In “Sticks and Bones,” the young Vietnamese woman (Nadia Gan) who wanders around Ozzie and Harriet’s suburban house is seen only by David (Ben Schnetzer) and the audience, except when Ozzie (Bill Pullman) and Harriet (Holly Hunter) figuratively — or is it literally? — kill her and put her body in a garbage bag. To these two parents, she is the other, the outsider, and they throw enough racial epithets at her to fill a Ku Klux Klan meeting.

More upsetting to Ozzie and Harriet than the fact that David’s blind and he’s suffering from post-traumatic stress disorder (long before anyone in suburbia had put together the letters PTSD) is that David and Zung — David calls her Zung — made love. Or was it rape or something far worse? Ozzie and Harriet could probably forgive their son anything. But having sex with this “yellow whore”?

It’s this affair that also prompts Father Donald (Richard Chamberlain) to visit David to have a long talk about the evils of miscegenation. Suffice to say, the talk doesn’t go well. In that respect, “Sticks and Bones” might be further away from today’s fixations on torture and militant religions and much closer to the post-World War II era of Rodgers and Hammerstein, who had to kill off their “South Pacific” character Joe Cable because he was in love with Liat, an Asian.

That’s the jolt of seeing “Sticks and Bones” today. Its lasting power, however, derives from something much greater, more universal. Whether David has had sex with an Asian or he has joined ISIS, these things are just the McGuffin — as Alfred Hitchcock would have explained — that sets the drama in motion. What remains harrowing is that Ozzie and Harriet have a son, home from the war, and he is a stranger whom they no longer know but they learn to know well enough in the course of a few days to hate. He’s the new outsider in their midst, and there’s even talk of checking David’s dental records to make sure he’s their son.

“Sticks and Bones” runs nearly three hours, and for most of that time Pullman’s Ozzie is having one long, grueling nervous breakdown. This Ozzie begins as a TV cartoon father, and while racism keeps stirring his anger, it’s not at the core of his agony. When Ozzie discovers his son’s army cap, laced with razor blades because he’d like “to cut” people, Pullman gives us a heartbreaking portrait of any father’s worst nightmare.

Pullman plays counterpoint to Hunter’s amusingly shrill Harriet, who performs on a much higher octave; and the brilliance of Scott Elliott’s direction is that Schnetzer’s David emerges as very much Ozzie’s tortured son, just as Raviv Ullman’s Rick is very much Harriet’s guitar-strumming robot-son. In an atonal stream of conscious, Pullman’s Ozzie never stops exploring his own darker emotions, while Hunter’s Harriet remains all staccato, skimming the surface with homilies that turn flat even before the words leave her lips.

This revival is also blessed with the deliciously wicked casting of Chamberlain as the priest. Who else but Dr. Kildare could counsel Ozzie and Harriet’s family?