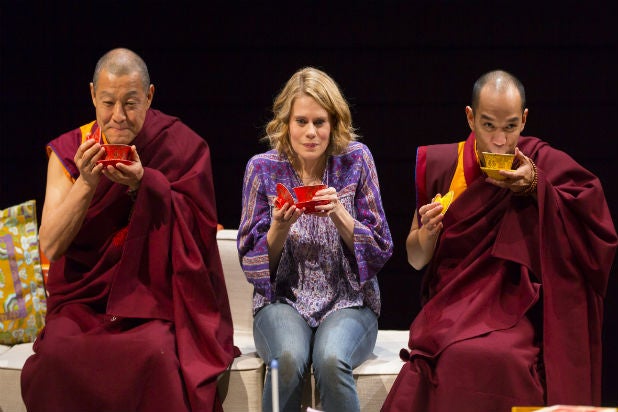 In 1993, Bernardo Bertolucci released a movie, “Little Buddha,” that explores the odyssey of a young American boy who is sought out by two Tibetan monks who believe he’s the reincarnation of a lama, a high Buddhist teacher. At the heart of this conflict is that the boy’s parents are played by non-Tibetan types, Bridget Fonda and Chris Isaak.

Neither Roger Ebert, who hated the movie, nor Janet Maslin, who liked it, had much of a clue what Bertolucci wanted to say with “Little Buddha.”

That lack of clarity is definitely not a problem with Sarah Ruhl’s new play, “The Oldest Boy,” which opened Monday at Lincoln Center’s Mitzi E. Newhouse Theater, and tells a very similar story. Actually, “The Oldest Boy” tells only half of Bertolucci’s movie, the much better half, and wisely drops its parallel historical story of Prince Siddhartha, who appears in the form of Keanu Reeves.

For those theatergoers who believe in virgin births, eternal progression, and reincarnation, Ruhl ups the likelihood of the little boy (played by a puppet and voiced by Ernest Aruba) being a reborn lama by making his father (James Yaegashi) a Tibetan refugee living in the United States and married to a white woman (Celia Keenan-Bolger). If this mother (Ruhl doesn’t give her characters proper names) is shocked to be visited one day by a Buddhist monk (Jon Norman Schneider) and lama (James Saito), Ruhl makes it clear that the two men are even more shocked that she’s white.

As in “Little Buddha,” the parents in “Oldest Boy” eventually consent to sending their son to Nepal to be tested to see if he’s the real thing, and later enthroned and educated. Of course, “The Oldest Boy” is really about the education of this sweetest mother, who back in the U.S. was an adjunct professor (“a very badly paid teacher”) and went through a rather ghastly experience during her final oral exam. Ruhl has a lot to say about the bonds of parents and children, of teachers and students, and how sometimes it’s necessary to break those bonds to learn. Sometimes, what with all this talk about education, “The Oldest Boy” feels more like a lecture than a drama, especially in the second act when the mother is less a participant than a narrator. Her memories of that awful oral exam are vivid and point to what might have been a more interesting play, about the horrors of academia in America. It’s odd that in act two Ruhl didn’t dramatize the traumatic oral exam, to use it as a parallel flashback to the scene in act one that dramatizes the mother and father’s fraught courtship.

Ruhl’s grasp of the subject isn’t as secure in its audacity as in her plays “The Clean House” or “In the Next Room,” but she knows how to engage an audience, and is one of those few writers who makes us wish her plays were longer, not shorter.

“The Oldest Boy” recalls “Little Buddha” not only in its story line but Rebecca Taichman’s handsome staging, which includes a Cinemascope-size panorama upstage that expands to depict the mother’s dreams and fantasies. The work of Mimi Lien (sets), Anita Yavich (costumes) and Japhy Weideman (lighting) is stunning. Puppet design and direction is by Matt Acheson, who could well put all child actors out of work. For the next Broadway revival of “Annie,” Acheson is the go-to guy.

Keenan-Bolger is less successful playing the mother. She’s forever chirpy and upbeat, as if she hasn’t quite grown out of her adolescent stint in “Spelling Bee,” but then maybe that’s the point. In “The Oldest Boy,” she’s more student than mother.