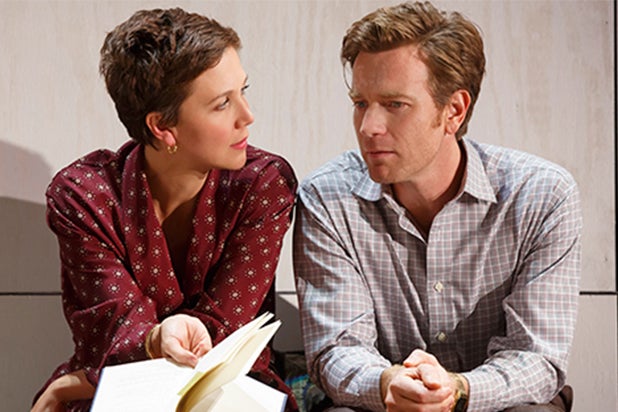 It takes real guts for Ewan McGregor and Maggie Gyllenhaal to make their respective Broadway debuts in “The Real Thing,” which opened Thursday at Roundabout’s American Airlines Theatre.

Tom Stoppard‘s comic meditation on what’s the real thing in love, art, and politics has been blessed with Tony Awards in its two previous incarnations on Broadway, with lead actors Jeremy Irons and Glenn Close (1984), as well as Stephen Dillane and Jennifer Ehle (2000), being honored.

For some reason, despite the star power, I barely remember the 1984 production, directed by Mike Nichols. I can report with certainty, however, that McGregor and Gyllenhaal hold their own against Dillane and Ehle, and offer an entirely different experience in the theater.

Stoppard’s writing strives to even the adulterous battle field between the liberal, do-gooder actress Annie (Gyllenhaal) and her illicit lover turned second husband Henry (McGregor), who is a politically conservative playwright, as well as a clear stand-in for Stoppard himself. In David Leveaux’s 2000 revival, Ehle begged for our sympathy while Dillane simply spoke “the truth” as delivered by his casual, crumpled Henry.

McGregor and Gyllenhaal’s dynamic is almost the opposite, and, for me, far more intriguing.

Tonys and Oscars go to those who do the most acting, not necessarily the best acting, and since Gyllenhaal’s super-subtle performance is the antithesis of showy she’s no shoo-in for end-of-season trophies. Regardless, she absolutely grounds “The Real Thing,” making Annie’s arguments every bit as convincing as Henry’s.

McGregor walks on stage as if in a comedy by Noel Coward, with the style and grace to play Coward as well. He’s almost flighty in his goodwill and quick repartee, and it’s soon obvious that he’s using his intellect to distance himself from what he really feels. It’s an interpretation that’s immensely entertainment, but one that might fail if not for Gyllenhaal, who always brings his character’s exhilarating, often eccentric, verbal flights back to earth. Their chemistry is like Katharine Hepburn and Spencer Tracy’s only in reverse. She’s solid and implacable, he’s high-strung and nervously pecking around for a way to chip into her guarded world.

Meanwhile, the world around them on stage is sometimes a bit off kilter — and not always in a good way.

Sam Gold gives “The Real Thing” a directorial flourish that brings to mind “The Big Chill,” released in 1983, a year after the Stoppard play had its world premiere in the U.K. In addition to love, art, politics, and a few other things, “The Real Thing” looks at how pop culture can, for some people, be more the real thing than classical art. Henry, for instance, winkingly insists that Bach ripped off Procul Harum’s “A Whiter Shade of Pale.” For him, pop music is the real thing, classical isn’t, because of the real emotions it triggers in him. And he definitely prefers the songs of the Crystals, the Monkees, and Neil Sedaka to anything Verdi ever wrote.

Like his Henry, the oft-married Stoppard is a pop-music aficionado whose various wives, as in “The Real Thing,” have failed to convert him to classicism. Hardly to be confused with hard rock, Henry/Stoppard’s taste in music is strictly easy-listening, and it’s not only referred to constantly in “The Real Thing,” these tunes also serve “as a bridge to the next scene,” as Stoppard specifies.

Gold goes much further, and his actors actually sing these pop tunes, not only to connect some of the scenes but to kick off the show and turn the curtain call into a vocal encore. It’s an effect that suggests the bonhomie of those aging “Big Chill” characters who use the songs “My Girl,” “I Heard It Through the Grapevine,” and, yes, “A Whiter Shade of Pale” to wax nostalgic about their former, more idealistic selves.

That’s definitely not what Henry’s doing here. He’s using his plebian taste in music to be a provocateur to his actress wives, Charlotte (Cynthia Nixon) and Annie (Gyllenhaal), not to mention everyone else in the theatre world, who would clearly prefer listening to Bach or Maria Callas.

Gold’s directorial flourish isn’t lethal, but it gets the play off to a bumpy start, especially in the first scene when Nixon brandishes an English accent not heard outside Buckingham Palace. She’s overly arch and brittle in the play’s first scene, which is an excerpt from Henry’s play “House of Cards,” which costars Annie’s first husband, Max (an excellent Josh Hamilton). In the follow-up scene, played offstage in Charlotte and Henry’s living room, Nixon is just as arch and brittle, and it’s difficult to tell if Charlotte is angry at Henry for screwing around or Nixon is struggling with her impersonation of Camilla, Duchess of Cornwall.

This revival isn’t perfect, but McGregor and Gyllenhaal are definitely the real thing.