In his new film “Stillwater,” Matt Damon wants you to know that he’s an American, and he sticks out like a sore thumb as a roughneck, good ‘ol boy from Oklahoma overseas in Marseilles, France.

Damon plays a man tirelessly working to free his daughter from a French prison over a murder she claims she did not commit, only to come face to face with language barriers, a complicated legal system, cultural differences and a shadowy group that doesn’t want the secret to get out.

But armed with a thick Oklahoma accent, a goatee and some US of A gumption, he won’t quit until his daughter is released. 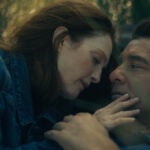 “I’m trying to get my girl out of prison, that’s all I give a damn about,” Damon shouts in the trailer.

“You sound very American right now,” his associate (played by Camille Cottin) says. “Good! I am!”

“Stillwater” is Damon’s first film since 2019’s “Ford v. Ferrari,” where he played Carroll Shelby, and he’ll next be seen in Steven Soderbergh’s “No Sudden Move” and “The Last Duel” from director Ridley Scott based on his own screenplay with Ben Affleck.

“Stillwater” is produced by Steve Golin, Tom McCarthy, Jonathan King and Liza Chasin. Focus Features is releasing the movie in theaters on July 30.