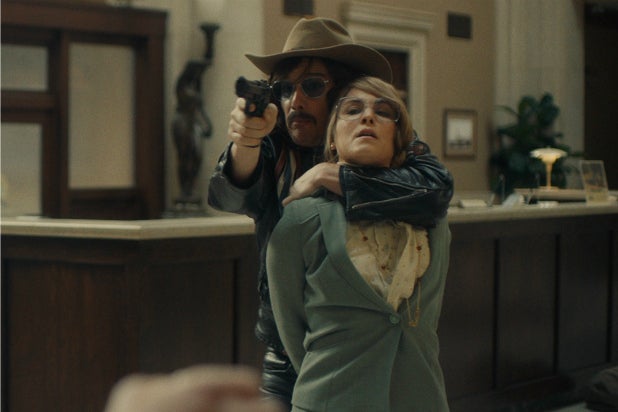 Ever wonder where the phrase Stockholm syndrome came from? The answer can more or less be found in Robert Budreau’s bank-heist biopic “Stockholm.” The film announces its intentions from the start, boldly declaring itself “Based on an absurd but true story.” Neither claim — the absurdity, nor the truth — is entirely accurate, leading to a movie that is both intermittently compelling and consistently uneven.

Budreau certainly has enough to work with, having adapted a lengthy 1974 New Yorker story about a still-infamous robbery in Sweden. Though the names and, as it turns out, some crucial details have been changed, the script hews fairly close to the basic event. An impish Hawke blasts things off as Lars Nystrom, the Swedish-born, American-raised troublemaker who announces his arrival at Stockholm’s biggest bank by blaring Bob Dylan on the radio while simultaneously brandishing a machine gun.

The first person to notice his softer side is bank clerk Bianca (Rapace), who joins colleagues Klara (Bea Santos, “True Detective”) and Elov (Mark Rendall, “Versailles”) as Lars’s hostages. Lars and his eventual accomplice, Gunnar (Mark Strong), do their best to keep the cops off-balance by threatening and even committing violence. But behind the scenes, they don’t act like we think criminals should, and as a result, their hostages don’t respond the way we’d expect.

Also Read: What Is Stockholm Syndrome? The Answer Starts With a Bank Heist (Podcast)

Budreau also seems to have some difficulty reconciling his feelings. In actuality, there was nothing “absurd” about the original story: it was a traumatic experience that occurred under intense psychological and physical threat. But that’s a heavy subject, and Budreau seems to want to make a popcorn lark. So Lars becomes an eccentric, somewhat dim-witted sweetheart who serves as a fine contrast to Bianca’s dully literal husband Christopher (Thorbjørn Harr, “22 July”).

As both writer and director, Budreau follows this path to its natural Hollywood conclusion: a romantic connection between lonely souls Lars and Bianca. Unfortunately, he’s ostentatiously staked his claim on the movie’s basis in truth. And in reality, the only sexual experience between captor and hostage was the result of one victim’s fear of assault. Which exposes the biggest problem of all: Budreau sees Stockholm syndrome less as a serious reaction to extraordinarily extreme circumstances and more as a potential kickoff for a catchy elevator pitch. His hostages don’t connect with their captors as a survival mechanism, but because Lars is a total charmer and the authorities (Christopher Heyerdahl, Shanti Roney) are uptight jerks.

The entire production suffers, too, from the ghost of a similar, and iconically more successful, venture hanging over its head. That “Stockholm” is no “Dog Day Afternoon” should go without saying. But if you’re willing to take the movie for what it really is — a fairly generic caper inspired by, rather than based on, actual events — you’ll find just enough to appreciate.

Foremost is Hawke’s spirited turn as the luckless Lars, a guy who usually wants to do the right thing but always goes about it in the wrong way. Hawke, so excellent in Budreau’s 2016 Chet Baker biopic “Born to Be Blue,” doesn’t merely rise to a challenge, but also compulsively expands and explores it. Rapace proves a perfect foil, bringing crucial gravitas to a movie that can’t settle on its own tone. Both actors ride the wave from comic misunderstandings to tear-jerking drama to unlikely romance without ever losing their footing.

The same can’t be said for a muted Strong, who has the thankless task of playing straight man to Hawke. The effort of keeping his dignity in the face of a preposterous ’70s wig and unfortunate denim-on-denim combo ultimately seems to overwhelm him.

But Budreau and editor Richard Comeau (“War Witch”) keep the pace moving swiftly, and cinematographer Brendan Steacy (“Titans”) deftly evokes each shifting mood. It’s awfully easy to relate to the hapless Lars as he struggles to adapt, whether in the dim and suffocating bank vault or an increasingly chaotic, blindingly-bright outside world.