The movie is considered a strong contender for an animation Oscar. It opens the London Film Festival with a gala screening tonight. It’s the opening-night attraction at the upcoming AFI Fest in Los Angeles.

But that’s not exactly why “Fantastic Mr. Fox” has been making headlines this week.

Director Wes Anderson’s stop-motion animated feature, based on a book by Roald Dahl, instead found itself in the spotlight courtesy of some good old-fashioned bad-mouthing, delivered by a couple of “Mr. Fox” crew members in a Sunday Los Angeles Times piece on the making of the film. 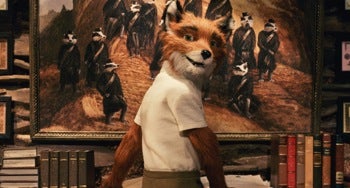 And it’s stayed in the spotlight courtesy of Fox, who sent a passel of reporters and bloggers (not this blogger, mind you) to London for one of the most noteworthy junkets of the year.

The trip obviously wasn’t envisioned as damage control, since it was in the works long before the Times article … but, on the other hand, reports out of London have done a decent job of shining up an image that had been a bit smudged by a story that painted Anderson as a capricious, remote autocrat.

According to the Times, Anderson didn’t want to be on the film’s London set for two years of painstaking stop-motion work. So after the voices were recorded – something done at a variety of locations, with Anderson present – the director stayed in Paris during principal photography, looking at footage and sending his input via email.

The film’s director of animation, Mark Gustafson, told reporter Chris Lee that Anderson “has made our lives miserable” by pushing them to abandon comfortable stop-motion techniques. Director of photography Tristan Oliver went further, terming the director “a little bit sociopathic” for his desire to stay in front of a computer, avoiding contact with people.

For his part, Anderson said he wanted a certain retro look, and wanted to push his crew to abandon some of their familiar stop-motion methods. “The simple reality is,” he said, “the movie would not be the way I wanted it if I just did it the way people were accustomed to doing it.”

The gripes were a relatively small part of the piece, and the only real surprise was that in this case the director is being called a sociopath in the press rather than outside his trailer (and out of his earshot) on the set. And one of the film’s producers, a stop-motion vet, even pointed out that the work is so slow and labor-intensive that it’s not usual for directors to not be physically present.

In the atmosphere stirred up by that story, a group of journalists landed in London this week for a few days of interviews and pub visits with the cast, a trip to Dahl’s home in Great Missenden, and tonight’s premiere. “Can good buzz be generated by good will?” asked Awards Daily’s Sasha Stone (who was not part of the junket).

For the most part, the buzzing from journalists who’ve been served drinks by Bill Murray has indeed been positive – as have most of the reviews, which so far have come from critics who’ve seen screenings, not from the London junketeers.

At Variety, for example, Todd McCarthy likes it quite a bit: “Anderson's indelible imprint is on every frame here, more for better than for worse.”  The Hollywood Reporter more or less agrees: “Anderson has created a world as stylized and inventive as anything he's done.”

In Contention, who already had a man in London for the film festival, posted a largely favorable review yesterday: “Ultimately, it’s hard to shake the suspicion that Anderson made the film for precisely nobody but himself, which is fine.” Turns out they were breaking an embargo by posting early, so they pulled it off the site. Today it went back up.

Back on the junket beat, meanwhile, Hollywood Elsewhere’s Jeff Wells does a six-minute video interview with Anderson.  Wells encourages Anderson to say that his disgruntled crew members should have known what they were signing on for.  The director does so, and then adds 1) movies are hard to make, particularly when you’re asking people to do things in new ways; 2) Oliver told Anderson he was misquoted; 3) that was a long time ago and things are better now; and 4) it doesn’t have anything to do with the movie, anyway. The money quote from Anderson: “The one word that I think gives one pause is sociopath.”

Movieline avoids the controversy, sets the scene and then asks Anderson to name his favorite movie scene of all time.  Anderson picks one from Roman Polanski’s “Rosemary’s Baby” -- presumably not just to show that a director can make good movies while doing far worse things than just alienating cinematographers.

Gawker surveys the results – and points out that given the state of entertainment journalism, the real surprise isn’t that the junket has resulted in positive stories, but that the L.A. Times would do a set visit and then run a negative piece in the first place.

The Auteurs rounds up the critical reaction.

Oh, and Hot Blogger David Poland is also in London. He posted two days ago while waiting in a line – OK, a queue – to see if he could get into “Enron: The Musical.” Then today, a quick note from the premiere: He says it’s been “pleasant indeed” and the actors seem to love Anderson. And he promises “smarter writing to come.”

For those who want to see a little bit of what the fuss is about, here’s the film’s initial trailer:

And here’s a featurette that shows Wes Anderson being very hands-on – no email directing going on here, thank you very much.