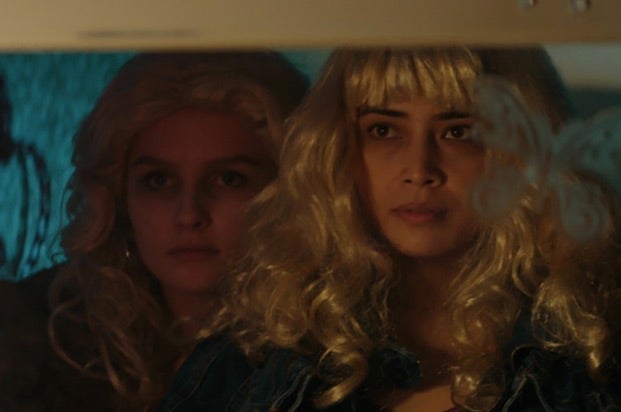 “Stray Dolls” is an indie crime thriller set in a low-rent motel and populated by a collection of shady characters — a motel noir, if you like — that throws a touch of female empowerment into the usual story of double-crossing in the dark underbelly of the American dream.

If the film, which was set for a theatrical release until the coronavirus closings forced it into a VOD premiere that begins Friday, manages to stand out a bit from similar indie films, it’s because of the perspective of its director, Sonejuhi Sinha. The India-born director comes at this as an outsider and shows us this sloppy underworld through the eyes of a young Indian woman who arrives in the U.S. looking to make an honest living but not terribly bothered if she has to occasionally ignore the honest part.

As a female-driven take on noir, “Stray Dolls” doesn’t feel as fresh as Bridget Savage Cole and Danielle Krudy’s “Blow the Man Down,” which premiered on Amazon Prime last month. But it has fun with the genre while making nods to “Thelma and Louise” and to the climate in a country that has grown less tolerant of foreigners over the last three years or so.

Geetanjali Thapa stars as Riz, a young woman who arrives from India and quickly lands housekeeping work at a seedy motel somewhere on the East Coast. The motel manager, Una, a weary-looking and slightly-accented Cynthia Nixon, acts all warm and motherly for a minute or two, though the first sign that it’s an act comes when she insists on hanging onto Riz’s passport “until we get you a new one – an American one.” The second sign comes a minute later, when Riz leaves the room and Una feeds the passport into her shredder.

Clearly, nobody stays at the Tides Plaza Motel if they’ve got anywhere better to go, and that includes the staff. But how to get out? That’s the question faced by Riz and her co-worker/roommate, Dallas (Olivia DeJonge), who figures the trick is a little housekeeper burglary. At first, Riz seems to be the good girl to Dallas’ wild child, but soon they’re bonding over a shared history of transgression – and before long, Riz has lifted a brick of cocaine from one of the rooms and Dallas has enlisted her boyfriend, Jimmy (Robert Aramayo), to sell it.

It’s not hard to figure out that things won’t go well from here, particularly in a movie like this — sure enough, complications ensue and Riz and Dallas find themselves in a deeper, darker mess than they’d bargained for. (For young women who are clearly in over their heads, these two are oddly willing to graduate to more serious crimes.)

“Stray Dolls” is a character study of two women trying to take agency in any way they can, and a noir crime tale that puts women front and center. But above all it’s a trip to the dark side of the American dream, where everybody uses illusions and delusions to survive in a grimy landscape where they have no real options.

Sinha gives the sleazy motel a vividly murky sense of place even as the story doesn’t really have anywhere to go, and she drops in a couple of wonderfully odd music choices, bringing out the death that always lurked in “Danny Boy” and then milking the druggy fantasia that is Nancy Sinatra and Lee Hazelwood’s “Some Velvet Morning” for all its worth. But the film is at its best in exploring the gaps between dream and reality – when Riz gets on a pay phone and calls her family back in India with updates, she lies to herself as much as she lies to them.

“This is America,” Dallas says to Riz at one point. “You want the rainbow, you gotta put up with the rain. You know who said that? Dolly Parton.”

In “Stray Dolls,” though, there’s lots of rain and no sign of a rainbow. And you can’t get to Dollywood from there.