HBO just made your day — and possibly your summer. Either way, Tuesday’s release of the first “Succession” Season 3 teaser will have to tide fans over until the fall premiere. (Or really, until a full-length trailer comes out.)

You may not believe this, but the third season of “Succession” is all about power plays within the Roy family’s media empire, pitting prodigal son Kendall (Jeremy Strong) against self-made magnate and family patriarch Logan (Brian Cox). OK, so you definitely can believe that, because it is also the plot of Seasons 1 and 2. To be clear, we are most certainly not complaining.

As Kendall and Logan battle for control, Shiv (Sarah Snook) is making moves of her own, and her allegiance can be bought for the right price. (Something that should also be bought for the right price is a new daily planner, as Siobhan spits in what is probably her dad’s diary in the Season 3 teaser. Not the classiest of moves, perhaps, but her hair still looks great.) 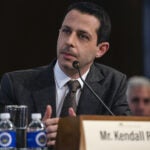 Ambushed by his rebellious son Kendall at the end of Season 2, Logan Roy begins Season 3 in a perilous position, scrambling to secure familial, political and financial alliances, HBO’s logline reads. Tensions rise as a bitter corporate battle threatens to turn into a family civil war.

Watch the Season 3 teaser via the video above.