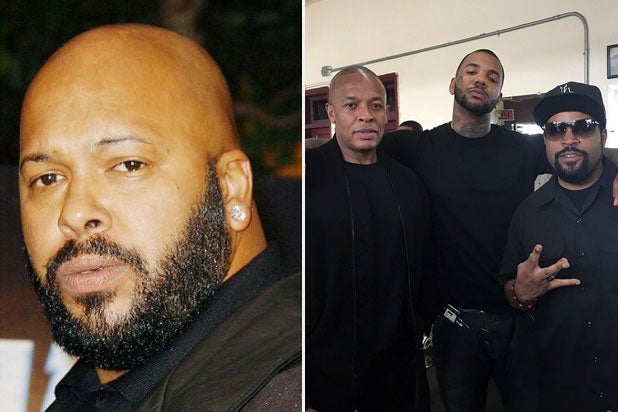 Hip-hop mogul Marion “Suge” Knight was charged with murder after turning himself in to the Los Angeles County Sheriff’s Department’s West Hollywood station with his attorney at 12:30 am PT.

Knight was booked at 3 am PT, the Sheriff’s Department confirmed to TheWrap.  His bail was set at $2 million.

Hip-hop mogul Marion “Suge” Knight argued with two men that witnesses said he later deliberately ran over with his truck in a deadly hit-and-run at a promotional shoot for the upcoming Universal release “Straight Outta Compton,” authorities said.

“We have several witnesses who saw him run over the men. It looked to them it was intentional,” Lt. John Corina of the Los Angeles County Sheriff’s Department’s homicide bureau said on Thursday night. He added: “They said it was an intentional act, that he ran the two individuals over. But we want to talk to him.”

The witnesses told police that about a half hour earlier the two men got into an argument with Suge Knight. “It looks like it carried over to the area where the two men got run over,” said Corina.

The troubled hip-hop mogul’s attorney is currently working with law enforcement to arrange for him to surrender, according to the Sheriff’s Department.

The fatal collision occurred at 2:55 p.m. in the 1200 block of West Rosecrans Avenue in Compton, California. “There are two victims that were transported to a local hospital to be treated for their injuries. A male adult was pronounced dead at the hospital. The second victim is in unknown condition,” the Sheriff’s Department said.

The man who died was 55 years old. The injured victim is a 51-year-old male, the Sheriff’s Department said.

Hollywood moguls Ice Cube, Dr. Dre and rapper The Game were all on location Thursday shooting a promo for “Straight Outta Compton” when the deadly crash occurred. Hours before the collision, posted a photo on Instagram of the trio on set (see below).

An individual with knowledge of the situation told TheWrap the shoot was taking place in several different locations in the area. , . and were in a separate location and did not witness the collision, the individual said.

The crash happened after an argument in the parking lot of fast food restaurant Tam’s Burgers, where several members of the production crew had parked their vehicles.

“Two people were struck by a red pickup truck going backward, then forward,” Corina said. The vehicle is registered to Knight, according to Corina. Although authorities would not confirm that Knight was behind the wheel.

Late Thursday night the vehicle was located several miles away from the crime scene in the Westwood section of Los Angeles, Corina said.

Knight’s attorney James Blatt told Los Angeles television station KABC that Knight was indeed driving at the time of the accident and planned to surrender to authorities.

This is not the first time that Knight has been associated with violence. He was arrested in October on suspicion of stealing a female photographer’s camera, as TheWrap previously reported.

He is currently out on $500,000 bail in connection with the incident and is awaiting trial on a robbery charge. Knight is charged in that case along with comedian Micah “Katt” Williams.

“Straight Outta Compton” recently wrapped production. The film is slated to arrive in theaters on Aug. 14, 2015.

Deborah Day contributed to this report.