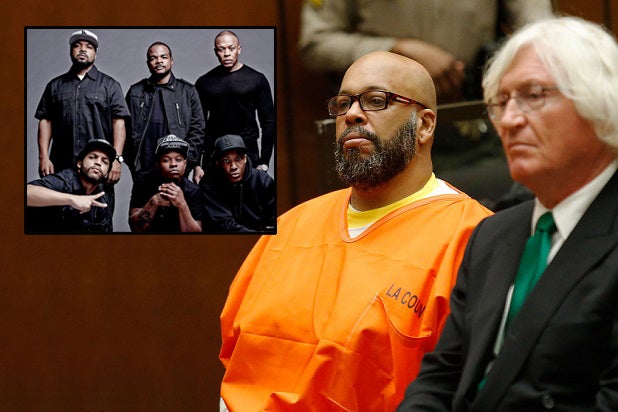 “Straight Outta Compton” shattered box office records and won rave reviews over the weekend, but not everyone is buying what the movie had to sell.

“I’m sure he wouldn’t like it because a lot of it is exaggerated and silly and ridiculous,” Mesereau told TheWrap Monday, on behalf of his client who is unable to see the film because he is sitting in a Los Angeles jail cell.

In the drama, which debuted with a massive $60.2 million at the box office, Knight is portrayed by R. Marcus Taylor, who bears a striking resemblance to the bodyguard-turned-music industry executive.

After N.W.A begins to splinter, the Knight character convinces Dr. Dre (Corey Hawkins) to leave the gangsta rap group and the two launch Death Row Records together. To get Dre out of his contract, Knight and his crew physically assault Eazy-E (Jason Mitchell), N.W.A’s leader.

Knight is also shown delivering body blows to anyone who blocks his path to success or makes him mad, including a man who’s stripped down to his underwear while Knight and company laugh as they urge a dog to terrorize the man.

While Mesereau hasn’t seen the film, he said he’s been contacted about it by several reporters, and insists Knight is misunderstood.

“A lot of the media does not realize how many good things he did for people, particularly in his community,” the attorney explained. “He financed athletic facilities in schools, he gave money to the homeless, money to people in need. He tried to arrange truces on the streets so people weren’t killed.”

The way Mesereau sees it, Knight was a pillar in the Compton community.

“He funded funerals for families who were devastated by violence. He used to give a dinner every year for single moms in Compton to recognize their courage and their achievement,” the attorney said. “He’s a good person, and this will come out in due time.”

While he wouldn’t name names, Mesereau also took aim at others who forgot about Compton once they made it big. “Unlike many other people who succeeded in the rap business, he never abandoned his community,” Mesereau said.

One thing the famed attorney cannot dispute is that his client is sitting in the Twin Towers Correctional Facility in downtown L.A. on $10 million bail while awaiting trial in a murder case.

On January 29, prosecutors say Knight allegedly plowed his truck into two men after an argument on the set of a promo shoot for “Straight Outta Compton,” then fled the scene.

The fatal collision occurred in the parking lot of a fast food restaurant which served as a base camp for the production. On the evening of the incident, Lt. John Corina of the Los Angeles County Sheriff’s Department’s homicide bureau told reporters, “We have several witnesses who saw him run over the men. It looked to them it was intentional.”

Terry Carter was killed in the collision and Cle “Bone” Sloan, an activist and actor was seriously injured.

Knight is currently facing murder and attempted murder charges. However, he says he was defending himself and has pleaded not guilty.

According to media reports, Knight was not invited to the promo shoot, but dropped in unannounced after hearing that a “Suge look-alike” had been hired to appear in the film. When asked if Knight went to the set to discuss his portrayal in the movie or in an effort to be paid for the use of his likeness, Mesereau responded Monday, “The only comment I have on these facts was that he was ambushed, he was defending himself at all times and he will be vindicated.”

Ice Cube, a founding N.W.A member who’s played in the film by his son O’Shea Jackson Jr., previously told TheWrap he had already left the set when the fatal crash occurred. “We wrapped for the day and were on our way home and got a phone call that ‘there was an incident.'” Asked what he would tell Knight if given the chance, Cube responded, “I hope you get out the situation you’re in.”

He’s also been slapped with a wrongful death lawsuit in connection to the January incident, and L.A. county prosecutors have charged him and comedian Katt Williams with robbery for allegedly stealing a celebrity photographer’s camera last September in Beverly Hills.

As for the murder case, Knight faces life in prison if found guilty because of prior convictions. Mesereau was hired to defend him after the former Death Row Records boss parted ways with attorneys James Blatt and David Kenner.

As for whether Knight’s portrayal in “Straight Outta Compton” could potentially affect the jury pool in the upcoming murder trial, Mesereau said no.

“Criminal cases are won in the courtroom, not in movie theaters,” he explained. “I have no concerns about the movie at all and I believe very strongly that Suge Knight will be acquitted.”