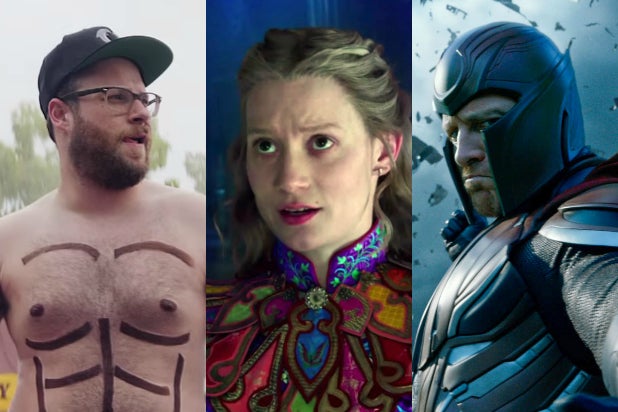 It’s been mostly dog days for studios so far this summer, with box office returns running 22.19 percent behind those of last year at this time, according to data from comScore that counted returns from the first Friday of May in each year through mid-June.

“The calendar won’t right itself until end of summer,” one studio executive told TheWrap, citing films like Disney’s “Finding Dory,” expected to have a massive opening this weekend, along with Universal’s “Bourne” sequel and Fox’s “Ice Age” sequel.

But as of now, the summer box office is also 28 percent below 2013’s record-breaking first half of summer — which saw the openings of such films as Disney-Marvel’s “Iron Man 3,” Warner Bros.’ “Man of Steel,” Universal’s “Fast & Furious 6” and Disney-Pixar’s “Monster’s University.”

What’s to blame for the slow start?

1. Blockbuster Fatigue
While “Captain America: Civil War” kicked off the summer in a big way, earning $398 million domestically to date, other big studio franchises haven’t blown up the way they have in the past.

2. Sequel Slump
The glut of poor performing sequels that have come out since May 6, including Disney’s bomb “Alice Through the Looking Glass” and Universal’s R-rated comedy fail “Neighbors 2: Sorority Rising,” have also weighted down the overall box office. 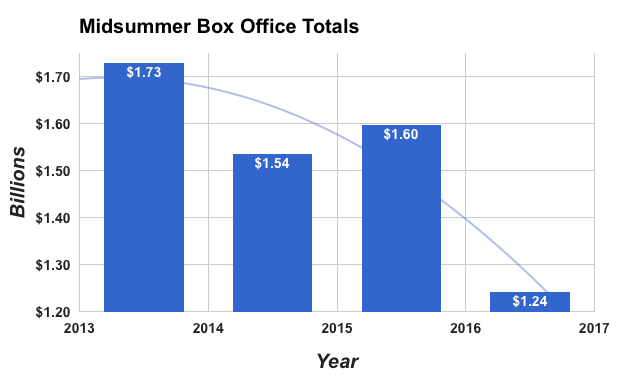 3. Weak Offerings
When it comes to comparing the start of this summer to last, and also the huge launch to summer 2013, the release calendar simply hasn’t been as dense with big, quality tentpole films. “We haven’t had that kind of depth this summer so far,” added the executive, who asked to remain anonymous.

“In a word: quality. As in, it just isn’t there this summer,” said Bock.

BoxOffice.com senior analyst Shawn Robbins gave a reason why the market is enduring an ebb between flows: “Audiences have spent a lot of money at theaters over the past six or seven months, so it’s natural to see earnings cool down for a little awhile.”

In spite of the drop since the summer, overall box office for 2016 is still running ahead of 2015 — but just barely. As of now, the total U.S. box office for the year is at $4.9 billion, 4 percent more than the figure last year at this time.

One studio that’s probably not sweating summer slowdown is Disney.

Despite the dismal performance for “Alice” — merch at the lobby store at the studio-owned El Capitain is already marked down 65 percent — Disney currently boasts $1.5 billion in domestic grosses thanks to hits like “Zootopia,” “The Jungle Book” and Marvel’s “Captain America: Civil War.” Add to that the projections for “Dory” this weekend.

Also Read: 5 Reasons Why Andy Samberg's 'Popstar' Is a Lonely Island at the Box Office

Disney claims nearly a third of all ticket sales this year — well ahead of 20th Century Fox, which is second in market share at 18.6 percent.

The Burbank-based studio is also on track to top Universal’s 2015 record of $2.4 billion thanks to eagerly awaited projects like the animated “Moana,” Marvel’s “Doctor Strange” and this December’s “Rogue One: A Star Wars Story.”

Disney aside, the summer should end on an upswing.

“‘Finding Dory,’ the ‘Jason Bourne’ sequel and the ‘Independence Day’ sequel should hit their high-water marks as well and original fare like ‘BFG,’ ‘Suicide Squad,’ ‘Secret Lives of Pets’ and ‘Pete’s Dragon’ — which might just save the summer,” Bock said.