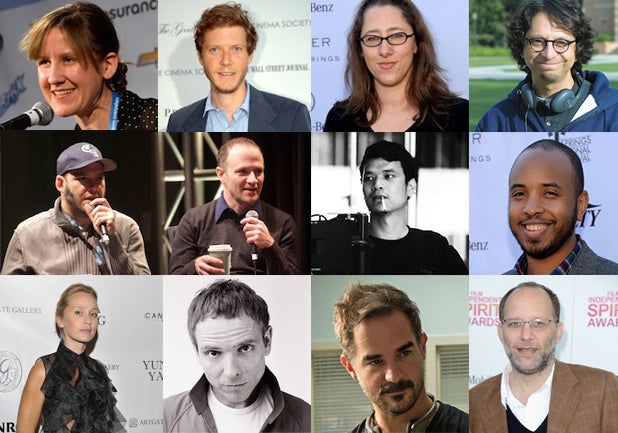 There are hundreds of talented directors, writers and producers at this year’s Sundance Film Festival but it’s impossible to give everyone their due without seeing the actual movies. With so many choices and such little time, TheWrap asked dozens of Hollywood types which filmmakers are poised for breakout success at this year’s festival. Here are 10 (well, technically 15) who could steal the spotlight this week, listed in alphabetical order.

KAT CANDLER (writer/director, left) and KELLY WILLIAMS (producer)
Movie: “Hellion” (U.S. Dramatic Competition)
Why They’re Worth Watching: Candler’s six-minute short film of the same name debuted at Sundance in 2012 and the feature version went through the Sundance Institute’s highly-regarded Creative Producers Lab. The duo took extra care in casting the drama’s young lead (Josh Wiggins) who goes toe-to-toe with Aaron Paul, one of the biggest stars at this year’s festival thanks to “Breaking Bad.” Several buyers that TheWrap spoke to heading into Sundance had “Hellion” high on their radars.
First Screening: Friday, Jan. 17, 2:30 p.m. at the Library

MONA FASTVOLD (co-writer/director)
Movie: “The Sleepwalker” (U.S. Dramatic Competition) -
Why She’s One to Watch: A female filmmaker from Norway who describes her film as a David Lynch-inspired “tone poem” and claims parts are based on her personal experience as a sleepwalker? She sure sounds ready for Sundance to us. Fastvold’s debut film stars up-and-comers Gitte Witt and Stephanie Ellis as sisters, while Christopher Abbott and Brady Corbet play their significant others. With sisters, a secluded location, abrupt violence and intense psychological themes, “The Sleepwalker” recalls recent Sundance sensation “Martha Marcy May Marlene” on paper, though something tell us there’s more than meets the eye to this one. Call it a Hollywood hunch.
First Screening: Monday, Jan. 20, 2:45 p.m. at the Library

Also read: Sundance: The Top Parties, Swag, and Scenes for 2014

MAYA FORBES (writer/director) and WALLACE WOLODARSKY (producer)
Movie: “Infinitely Polar Bear” (U.S. Dramatic Competition)
Why They’re Worth Watching: This husband-and-wife screenwriting team are Hollywood veterans, though Forbes makes her directorial debut with this family drama starring Mark Ruffalo as a manic-depressive father who tries to win his wife back. Forbes is a former writer and co-producer for “The Larry Sanders Show” who was among the inaugural class of the Disney Fellowship program, and she co-wrote “Monsters vs. Aliens” and “The Rocker” with Wolodarsky. It doesn’t hurt to have J.J. Abrams’ stamp of approval, as he executive produced the film through his Bad Robot banner. If the pre-festival buzz holds true, expect this one to contend for the Grand Jury Prize.
First Screening: Saturday, Jan. 18, 12:15 p.m. at the Eccles

STUART MURDOCH (writer/director) and BARRY MENDEL (producer)
Movie: “God Help the Girl”  (World Cinema Dramatic Competition)
Why They’re Worth Watching: Murdoch is best known as the lead singer of Belle and Sebastian but this is a passion project that he’s spent years prepping for the big screen with the help of super producer Mendel. With diverse credits that include “The Sixth Sense,” “Munich” and “Bridesmiads,” Mendel has never produced such a low-budget indie and even turned to Kickstarter to fund this labor of love.  If this hip Glasgow-set musical inspires “Once”-like passion amongst audiences, Murdoch may want to leave his music career behind and focus full-time on filmmaking.
First Screening: Saturday, Jan. 18, 6 p.m. at the Egyptian

JAKE PALTROW (writer/director)
Movie: “Young Ones” (Premieres)
Why He’s One to Watch: Paltrow’s debut film “The Good Night” premiered at Sundance in 2007 but failed to register with audiences upon release. He should have a better chance to make a splash with this Western-flavored sci-fi movie, which boasts a top-notch young cast including Nicholas Hoult, Elle Fanning and Kodi Smit-McPhee, as well as Michael Shannon. Paltrow wound up directing Shannon in an episode of “Boardwalk Empire,” so at the very least, HBO has been paying attention. Audiences would be wise to do the same, as “Young Ones” could end up being a sleeper hit at Sundance.
First Screening: Saturday, Jan. 18, 9:45 p.m. at the Eccles

IRA SACHS (director/producer/co-writer)
Movie: “Love Is Strange”  (Premieres)
Why He’s One to Watch: Sachs has been making movies for two decades, so while he can hardly be considered a breakout, something tells us his latest film may be his most commercial yet. His last film, the gay romance “Keep the Lights On,” drew rave reviews, but this love story is very different and may stand a better chance of catching on with mainstream moviegoers. John Lithgow and Alfred Molina star as long-time partners who separate, and the film explores how this affects both them and their family. Sachs is a Sundance stalwart who should be awarded proper respect from viewers who can appreciate an intelligent drama.
First Screening: Saturday, Jan. 18, 6:30 p.m. at the Eccles

PETER SATTLER (writer/director)
Movie: “Camp X-Ray” (U.S. Dramatic Competition)
Why He’s One to Watch: Because he’s got Kristen Stewart, and sometimes that’s all you need. Seriously though, any movie about the relationship between guards and prisoners at Guantanamo Bay is sure to come with a spotlight, but Sattler is looking at a big, provocative issue through a small, intimate lens. Those who have seen it credit the writer-director for avoiding politics and focusing on the characters. Sattler knew that casting Stewart was a risk, but his script gives the “Twilight” star the opportunity to showcase a different side of herself and we’re guessing his gamble is going to pay off.
First Screening: Friday, Jan. 17, 12:15 p.m. at the Eccles

Also read: 16 Breakthrough and Comeback Performances of This Awards Season

JUSTIN SIMIEN (writer/director/producer)
Movie: “Dear White People” (U.S. Dramatic Competition)
Why He’s One to Watch: It came as no surprise to learn that Simien is a former publicist, as he clearly had the good mind to give his film a catchy title. That’s important, since marketing is half the battle these days. Simien used Indiegogo to crowd-fund  his debut feature, which takes its title from the director’s Twitter feed. The film follows four black students at an Ivy League school where a riot breaks out over an “African-American”-themed party. Simien’s concept trailer for the film struck such a nerve that the ensuing publicity landed him on CNN, and we’re guessing the full-length feature will have people talking in equal measure.
First Screening: Saturday, Jan. 18, 8:30 p.m. at the Library

TIMO TJAHJANTO (writer/co-director/producer, left) and KIMO STAMBOEL (co-director/producer) aka ‘The Mo Brothers’
Movie: “Killers” (Park City at Midnight)
Why They’re Worth Watching: While these guys co-directed the short film “Dara” before graduating to their feature directorial debut “Macabre,” it was Tjahjanto’s segment of “V/H/S 2” that shocked last year’s Sundance and made him a budding rock star to genre film fans. Their latest boasts executive producer Gareth Evans (director of “The Raid”) and follows two serial killers who battle for notoriety online before an epic face-to-face confrontation. If that description doesn’t get you excited for this year’s midnight movie madness, we’re afraid nothing will.
First Screening: Monday, Jan. 20, Midnight at the Egyptian

DAVID ZELLNER (co-writer/director, left) and NATHAN ZELLNER (co-writer/producer)
Movie: “Kumiko, the Treasure Hunter”  (U.S. Dramatic Competition)
Why They’re Worth Watching: The Zellner brothers’ fellow filmmakers seem excited to check out “Kumiko,” and sometimes they know better than us. Based on a true story, this quirky tale features an inspired premise, as Rinko Kikuchi stars as a woman who sets out to find the missing briefcase full of money from the Coen brothers’ movie “Fargo.” The Zellners hail from Austin, Texas, which has been a hotbed for forward-thinking creatives determined to make a name for themselves. “Kumiko” should do the trick on the heels, or rather paws of 2008’s missing-cat comedy “Goliath.”
First Screening: Monday, Jan. 20, 12:15 p.m. at the Eccles