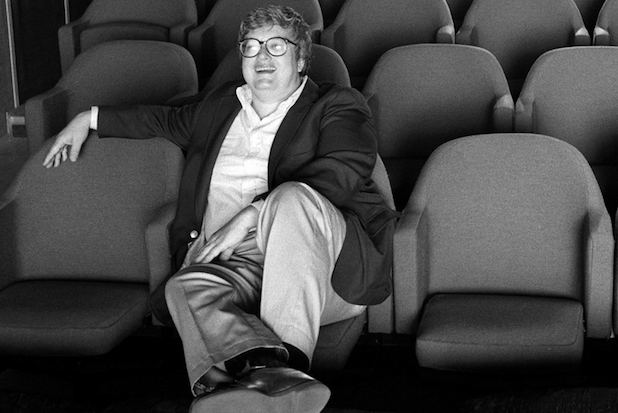 The most influential figure at Sundance on Sunday was someone who wasn’t there: Roger Ebert, the iconic film critic and subject of a new documentary, “Life Itself.”

Steve James‘ film offers an unvarnished look at the life of America’s most famous film critic, ranging from his alcoholic youth, to his Pulitzer Prize, to his struggle with cancer and mainly, the two loves of his life – movies and his wife Chaz.

“This was the easiest film to program ever in my history,” festival director John Cooper, who has worked at Sundance for 25 of its 30 years, said before the movie screened.

Viewers filing out of the theater pronounced the film Oscar-worthy while New York Magazine’s Jada Yuan tweeted that it is “far and way the most moving film I’ve seen this #Sundance. Thumbs up and lots of tears.”

Many, including Cooper and director Steve James, shed tears — none more affecting than those of Chaz Ebert.  She watched the movie for the first time.

“It’s a very Roger thing to do – to want to make a discovery of a film at Sundance,” she told TheWrap. “I want to see it with everyone else.”

Ebert’s widow received one of two standing ovations for the film, the other bestowed upon James, who is back at Sundance 20 years after Ebert raved about his first documentary, “Hoop Dreams.”

Sundance has long been an launching pad for great documentaries, and this year is no different, including several films that investigate hidden aspects of notorious moments in political, criminal or athletic history.

“The Case Against 8” had audiences buzzing and debating the issue of marriage equality through the weekend. But several other documentaries also prompted intense debate at their premieres.

Joe Berlinger’s documentary “Whitey: United States V James J Bulger,” which will air on CNN in the spring, stakes out a complicated position on the notorious criminal by challenging the integrity of the trial that convicted the former crime boss last year to life in prison.

“This is not an apology for Whitey Bulger,” Berlinger said in an interview with TheWrap on Sunday. “He’s a vicious, brutal killer. He should not be walking the streets. But he should have a full and meaningful opportunity to defend himself.”

Berlinger, best known for a trilogy on the wrongfully convicted West Memphis Three, details why Bulger could not fully defend himself at his trial. In the film, Bulger gives his side of the story for the first time since his arrest, as Berlinger filmed a conversation between the convict and his lawyer to circumvent the state barring a proper interview.

Penn State alumni turned out in droves for the tale of another criminal, “Happy Valley.” Amir Bar-Lev’s documentary about convicted sex offender and disgraced football coach Jerry Sandusky examines the effect his transgressions had on their alma mater and the community around it.

“I’m happy with my involvement in the film and how it was told,” Sandusky told the crowd, many of whom went to Penn State. “The ending is what I want to be seen — what we’ve endured and been through. You feel the world is against you but we have each other.”

Despite the emotional responses to many of these documentaries, the festival’s chief programmer Trevor Groth told TheWrap Thursday he felt documentaries were in need of a PR makeover.

“Most people that don’t go to film fest, if you ask them if they want to go to the cinema to watch a documentary they’ll say no,” Groth said.

“For ages, since Sundance has been around, there’s been a lot of people trying to figure out how to maximize an audience for those documentaries.”

Yet two more aggressive buyers, Netflix and CNN, have improved documentaries’ chances of being seen by those who might ordinarily spurn the genre. Both companies bought movies before the festival began, including “Mitt,” the documentary about Mitt Romney that Netflix will distribute, and “Life Itself,” one of three movies CNN Films had entering the festival. It has since bought a fourth, “Dinosaur 13.”

The Ebert movie set two milestones. It is the first movie in Sundance history to be livestreamed online concurrent to its premiere (Sundance partner VHX powered the stream). That privilege was reserved for the 1,900 people who contributed at least $25 to the movie’s Indiegogo campaign.

“I had to participate because I knew Gene would have wanted to be a part of the film,” Iglitzen said. “It is a comprehensive and beautiful portrait of an amazing man.”

Chaz Ebert (pictured above with Steve James) quickly jumped in to thank Iglitzen, but rebutted one thing her counterpart said in the film – that Siskel was the more elegant of the duo.

“This is your night Chaz,” she said.