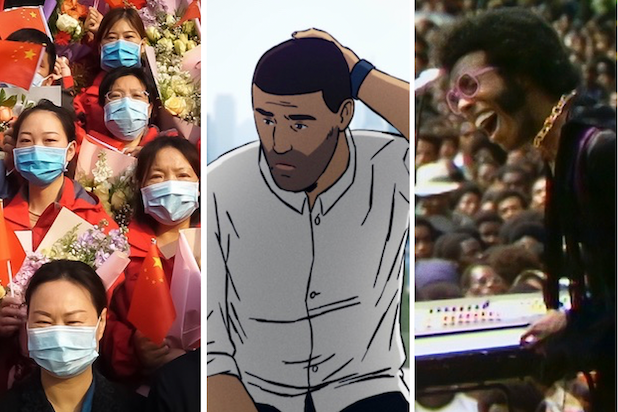 Left to right: "In the Same Breath," "Flee," "Summer of Soul" / Sundance Institute

If you’re looking for sure bets at the Sundance Film Festival, the smart money says you should look to the documentary programming. The festival’s lineup of narrative films, after all, is always hit-or-miss: For every “Minari” or “The Farewell” or “Beasts of the Southern Wild” that comes out of Park City to become a hit in theaters or on the awards circuit, there are dozens of movies that disappear, or that find that the rapturous reaction they received at 7,000 feet is considerably more tepid at sea level.

But Sundance’s documentaries rarely disappoint. Almost every year, more than half the nonfiction films that make the shortlist in the Oscars Best Documentary Feature category are films that premiered at Sundance — and when this year’s shortlist is announced on Feb. 9, there’s no question that it will be filled with Sundance’s Class of 2020.

Among the docs that premiered in Park City last year and are now in the thick of the awards race are “Boys State,” “Crip Camp,” “Dick Johnson Is Dead,” “Time,” “Welcome to Chechnya,” “On the Record” and many more. If nine or 10 of this year’s shortlisted films don’t come from Sundance, it’ll be a shock.

After all, the statistics are formidable: Over the last five years, Sundance has produced three of the five Oscars documentary winners, 13 of the 25 nominees and 42 of the 75 shortlisted films. (The Toronto International Film Festival is a very distant second, premiering three nominees, seven shortlisted films and no winners.)

When Sundance’s longtime festival director, John Cooper, stepped down after last year’s events, it was appropriate that the festival’s worldwide search ended up choosing Tabitha Jackson, the director of the Sundance Institute’s Documentary Film Program, which has long been one of the most essential programs in the nonfiction arena.

And while Jackson stepped into a job that found her having to help re-imagine the festival in the era of COVID-19, the lineup of this year’s largely virtual Sundance is typically strong in the nonfiction arena.

In fact, with the overall lineup slimmed down for this shorter, virtual edition of Sundance, nonfiction films make up a full 40% of the festival’s content. As usual, there are 10 documentaries in the U.S. Documentary Competition, another 10 in the World Cinema Documentary Competition, seven (out of 15) in the Premieres section and one each in the Next and Midnight programs.

Three of the six films presented in prestigious opening-night slots on Thursday will be docs: Questlove’s “Summer of Soul,” about the Harlem Cultural Festival that took place in the summer of 1969 and has been largely forgotten since; Jonas Poher Rasmussen’s “Flee,” about a refugee from Afghanistan in Denmark; and Nanfu Wang’s “In the Same Breath,” about the political response to the COVID-19 pandemic in China.

Also Read: 15 Biggest Box Office Hits That Premiered at Sundance, From 'The Blair Witch Project' to 'Get Out' (Photos)

The other films include works by well-known nonfiction filmmakers including Lucy Walker (“Bring Your Own Brigade”), Betsy West and Julie Cohen (“My Name Is Pauli Murray”), Rodney Ascher (“A Glitch in the Matrix”) and Pedro Kos (“Rebel Hearts”), as well as the first foray into documentary filmmaking from “Baby Driver” and “Shaun of the Dead” director Edgar Wright, whose “The Sparks Brothers” looks at the cult Los Angeles band Sparks.

The subject range from rebellious nuns (“Rebel Hearts”) to female journalists in India (“Writing With Fire”), from a groundbreaking Black choreographer (“Ailey”) to a Hispanic American superstar (“Rita Moreno: Just a Girl Who Decided to Go for It”), from a literary icon (“Amy Tan: Unintended Memoir”) to the artists who created a groundbreaking television program (“Street Gang: How We Got to Sesame Street”).

That’s just a small sampling of the nearly 30 nonfiction films that will be unveiled over the festival’s first six days. If history is any indication, those films will, in many ways, be at the heart of this year’s Sundance — and, more than likely, in the thick of next year’s awards race, too.