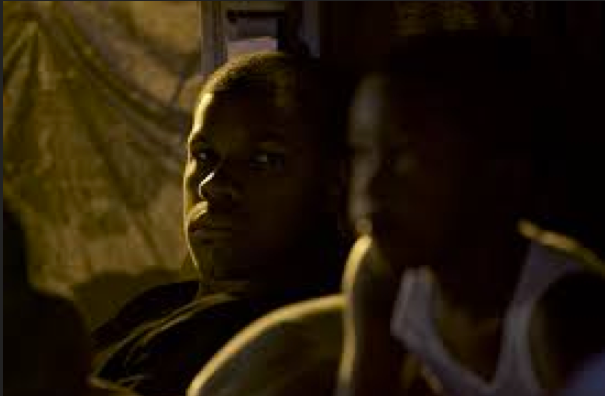 A remarkable new talent, actor John Boyega, was revealed at Sundance at the premiere screening of “Imperial Dreams” on Monday night, the emotional heart of a sobering story about life in the Los Angeles ‘hood.

Boyega plays Bambi, a young man just out of prison, determined to break out of the cycle of crime and violence that has defined his life thus far. He has a little boy to care for and is trying to become a writer, but all around him the dead end of no-opportunity, gangster ties, family and financial pressures try to nudge him back to his former life.

The film was shot in the projects of south central Los Angeles, and Boyega is surrounded by a cast of actors who are well familiar with the devastated territory, including Rotimi Akinosho as brother Wayne, and Ethan Coach as his son Day.

But Boyega, it turns out, is British, straight off a BBC project based on the events that led to Moby Dick, called “The Whale.”

Boyega seems like a star on the cusp: in addition to that movie and the Sundance debut, he begins filming the lead role in “Testament,” about a group of students at a prestigious boarding school, and also up for release is “Half of A Yellow Sun,” about Nigeria’s fight for independence, starring alongside Thandie Newton and Chiwetel Ejiofor.

The movie got a standing ovation and numerous emotional tributes from the crowd. But the audience at the library audibly gasped during the q-and-a when Boyega turned out to have a British accent.

“The script was sent to me, I read it, and I put it down,” he said. “I told my agent to tell the people in the States I’m not doing it. I was in Nottingham with my eggs and toast, having a full English breakfast.

But he auditioned. The director Malik Vitthal, and producers Jonathan Schwartz and Andrea Sperling told him his accent was “a bit off,” as Boyega put it. But he spent a month in Los Angeles working on it, learning the culture, the swagger, the language.

To great effect. Already comparisons to “Fruitvale” and Michael B. Jordan are being tossed around. The movie has a similar pounding heart, and is also based on a true-life story. The film is Vitthal’s first feature, and features a moving score by composer Flying Lotus.

Most of all, Boyega must carry the emotion of the story on his shoulders. He has the lumbering gait of a man whose hopes are weighed down by society’s indifference, and the open gaze of one who strives nonetheless to achieve his dreams.

As director Vitthal said at the premiere: “Love was his revolution.”

The movie is up for acquisition, and screening in the Next section of the festival.