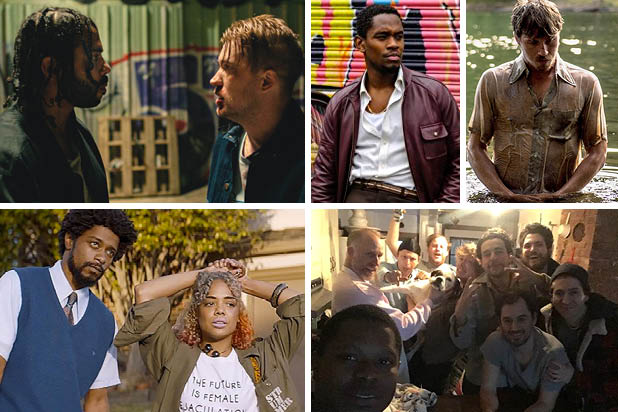 A rich crop of satisfying movies featuring themes of race and gender have stood out at 2018’s Sundance Film Festival so far, displaying a newfound confidence on issues that have divided the country.

From the funny-not-funny Oakland, Calif., drama “Blindspotting” to the micro-aggression symphony “Tyrel” to the satire “Sorry to Bother You” to Idris Elba’s tale of Jamaican immigrants in England in the early 1970s, “Yardie,” the films span a range of tone and undertone.

What they share is the strength of the voices and performances. Sundance always features diverse voices, but the quality has never been higher. In the years since #OscarsSoWhite, it seems that talent and stories about underrerpresented communities have found their way to Park City in significant numbers — and rather than feeling as if the festival is taking work to satisfy a quota, this year’s films simply seem to be an integral part of the festival’s longstanding commitment to showcasing new voices.

“Blindspotting” was a script nine years in the making from stars Daveed Diggs and Rafael Casal. It explores two best friends trying to define themselves in the social, political and racial pressure cooker of Oakland. It’s an unflinching look at what happens when those who are other cannot divorce the political from the personal.

These diverse voices are not limited to trauma. In Boots Riley’s “Sorry to Bother You,” LaKeith Stanfield plays a telemarketer who unlocks the keys to success when he puts on his “white voice” with customers. Sales skyrocket, which creates tension with his activist girlfriend (Tessa Thompson) as he becomes the object of insane boss Armie Hammer’s approval.

Meanwhile, women’s films are also taking center stage at the festival in the year of #MeToo and #TimesUp.  A full 43 female directors have joined the lineup across sections in the feature-film categories. If you include short films in the count, 42 percent of Sundance directors are female this year, a festival spokesperson told TheWrap.

Among them are Cathy Yan’s notable “Dead Pigs,” a mosaic of stories set against a 2013 phenomenon when 16,000 dead pigs surfaced in Shanghai’s Huangpu River In the film, Yanexplores the isolation she felt growing up in both China and the U.S.

Elizabeth Chomko’s writer-director debut “What They Had” explores Alzheimer’s with the help of Blythe Danner and Hilary Swank. Sara Colangelo also made waves as a writer-director with “The Kindergarten Teacher,” starring Maggie Gyllenhaal, about a woman teetering between her conventional life and her passion for art.

Other films directed by men often as not put women front and center. Wash Westmoreland’s “Colette,” with a towering performance by Kiera Knightley as the feminist icon, was one of two set in the 1890s, a time of tumultuous cultural, economic and political change. (The film sold to Bleecker Street and 30West in one if the few deals in the festival so far; more on that in a moment.)

The other was “Lizzie,” about hatchet-wielding Lizzie Borden (Chloe Sevigny), who did her nefarious deed in 1892. Both manage to set the stage for modern womanhood and the complicated world of contemporary feminism.

In Paul Dano’s directorial debut, the austere Richard Ford adaptation “Wildlife,” Carey Mulligan is raw and riveting as a Montana housewife chafing against the restrictions placed on women in the early 1960s. In Jesse Peretz’s “Juliet, Naked,” Rose Byrne is utterly charming and affecting as her character tries to find independence (while sort-of romancing a reclusive American rock star) in a small British town.

The Sundance documentary slate is once again a strong point, with “The Price of Everything,” “The Sentence,” “Three Identical Strangers,” “Believer,” “Robin Williams: Inside My Mind” and “Won’t You Be My Neighbor?” among the many docs that have drawn praise.

Perhaps none of the films hit the level of unanimous raves prompted by recent-year Sundance hits like “Call Me by Your Name,” “Me and Earl and the Dying Girl” and “Beasts of the Southern Wild,” but quality seems to have reached a high.

Still, sales have initially proved chilly. As TheWrap predicted walking into Sundance, buyers are more cautious than ever thanks to multiple factors. Indie institutions like Fox Searchlight (recently acquired by Disney) and Focus Features are facing tough competition from the deep-pockets of streaming giants like Netflix and Amazon, though deal-makers have begun to resist the worldwide exclusivity the streamers demand for their subscribers.

Discounting pre-sold titles (mostly docs), the biggest deal to close so far has been for “Colette,” which sold for seven figures on Sunday to Bleecker Street and 30West. But that sale was followed by the bidding war for “Blindspotting,” as buyers may begin to open their wallets as the opening weekend closes.

But money remains tight. Producers are better fed from the money they raise on international sales, one top dealmaker told TheWrap in Park City, but increasingly cannot convince the streaming giants to accept only North American rights. In addition, many in the marketare wary after the #MeToo movement has claimed several casualties in the indie market, with deals unraveling for Louis C.K.’s “I Love You, Daddy” and Morgan Spurlock’s “Supersize Me 2: Holy Chicken” after their filmmakers faced misconduct accusations.

The market would be wise to wake up to the caliber of films in Park City this year. They reveal a conscious nurturing of diverse voices, which can only serve our industry and audiences as they are heard, financed, produced and distributed.

In the words of Jane Fonda, addressing a Park City crowd at this year’s Respect Rally, thrown by the organizers of last year’s Women’s March: “This kind of change doesn’t just come about through protest. It comes through organizing.”