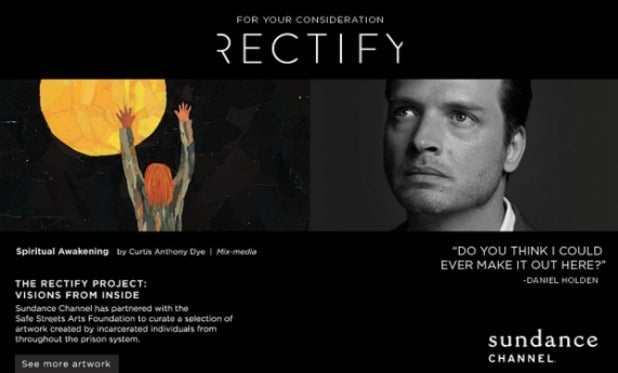 The Sundance Channel show “Rectify” asks if someone convicted of a heinous crime can once again contribute to society. So does its new awards season campaign, which features art by a killer serving multiple life sentences and a serial sex abuser serving a 105 years.

The critically acclaimed drama, about a man freed from death row after two decades, is using art by several current and former inmates in its attempt to win Golden Globes and other awards. The campaign includes showing inmates’ work in an online exhibit, “The Rectify Project: Visions From Inside.” The inmates’ subjects include waves, a cherub, and “24” actress Elisha Cuthbert.

“The campaign was created to ask the question, ‘How does art play a role in people’s prison experience?” as that directly connects to the story of ‘Rectify’s’ main character,” Sundance said in a statement to TheWrap.

It also said all of the artwork “was presented to us by The Safe Streets Arts Foundation,” a group that helps prisoners transition to freedom through art, and was chosen “based solely on the merits of the artwork and how each piece reflected the series.”
The incarcerated artists were not paid for their work, a network publicist said.

One of the artists, 60-year-old Bryce M. Tuller, contributed a painting of a vast ski slope with two tiny skiers. Convicted of first-degree homicide, he was denied parole last year partly due to a “history of violence [that] indicates serious risk to the community,” according to Virginia prison records.

Tuller belonged to a gang led by his father that killed a bank manager and Arlington County, Va., police officer in 1972, then hijacked a plane and fled to Cuba before returning to the U.S. He reportedly told police he returned “because nothing in this country can be as bad as what we went through in Cuba.”

Another artist is George Bozeman, also 60, who paints landscapes and was imprisoned in 1976 on six counts of sexual abuse and two counts of sodomy, according to Kentucky records. A 1976 Lexington Herald-Leader account said police believe he was an assailant who preyed on children and was known in the Lexington area as “Chester the Molester.”

Bozeman was released, but returned to prison in 1987 on a sodomy charge and four counts of burglary, according to prison records. (His booking photo is to the left.)

“I have a 105-year sentence,” said Bozeman in a statement. “I started art as part of a therapeutic program. Now art is everything. I think I will be doing it, experimenting with it, for the rest of my life.”

The artist who drew Cuthbert, 35-year-old Michael Wood, is serving a life sentence on an aggravated assault charge, according to Texas records. He drew the actress using only a “state issue” ballpoint pen, according to the Rectify Project. (The portrait, “Elisha,” is below.)

The campaign shows that Sundance’s awards campaign, like “Rectify” itself, doesn’t shy away from difficult moral questions. The show invites us to sympathize with Daniel Holden (Aden Young) without telling the audience whether he is truly innocent in the rape and murder of his girlfriend. In the show, he is set free after nearly two decades based on new evidence, but the prosecutor in the case continues to hound him, vowing to put him back behind bars.

The awards campaign’s “For Your Consideration” materials will feature the artists’ work alongside images and quotes from the freshman series, which is returning for a second season in 2014.

The project, a partnership between Sundance and the Safe Streets Arts Foundation, doesn’t say what crimes the inmates were convicted of committing.

But details of Bozeman, Wood and Tuller’s convictions are accessible in online prison records. TheWrap was not able to determine Wednesday, the day the project was announced, what crimes other prison artists involved in the project were convicted of committing. Some couldn’t be located because they have been released. It appeared that others may have painted under slightly different names than those under which they were convicted.

The arts foundation’s director, Dennis Sobin, told TheWrap the group doesn’t ask artists what crimes they were convicted of committing. He also said he himself had served a decade behind bars for a crime he didn’t commit, so he didn’t always believe a conviction equaled guilt.

“Our organization doesn’t discriminate,” he said. “They’re in there serving their time.”

He said prisoners sometimes submit violent and sexual images, as well as tranquil scenes like the ones painted by Tuller and Bozeman. All are welcome, he said.

Sobin said he was wrongly convicted of producing pornographic images years ago for shooting “harmless videos” while vacationing at a nudist resort. He was offered a plea to a misdemeanor, but turned it down, and a jury in a rural, conservative part of Florida found him guilty, he said.

He learned about the power of art by practicing to become a much better musician in prison. Since his release, he has played in venues including the Kennedy Center, he said.

“When you have eight hours a day in prison you can become very good,” he said.