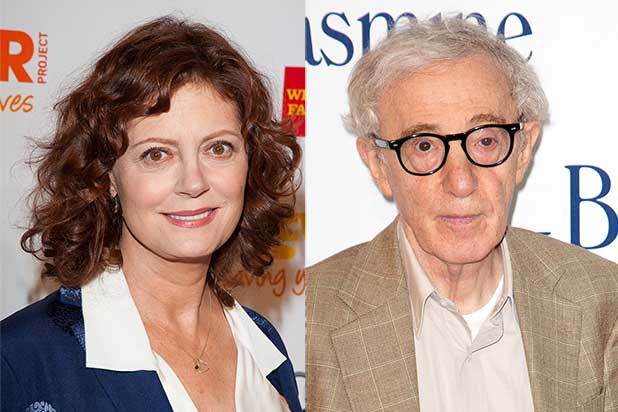 Susan Sarandon was discussing the May-December romance in her upcoming film “The Last of Robin Hood,” when she was asked about filmmaker Woody Allen‘s penchant for showing similar romances on screen. As it turns out, the actress was far more concerned with his off-camera lifestyle.

“I have issues with Woody Allen,” the actress told The Daily Beast. “I think he really tore that family apart in a way that was horrible, and hasn’t really dealt with the aftermath.”

In 1992, Mia Farrow’s 7-year-old daughter accused Allen of molesting her. Soon thereafter, it was revealed that the director was carrying on a secret affair with Mia Farrow’s adopted daughter, Soon-Yi Previn. Allen subsequently married Previn in 1997.

As TheWrap previously reported, the director’s controversial past resurfaced when Ronan Farrow accused Allen of molestation via Twitter while Allen was being honored with the Cecille B. DeMille Award at the 2013 Golden Globes in January. His sister, Dylan, then penned a New York Times op-ed  in February revealing that Woody Allen had molested her. The family’s public battle replayed out in the media, prompting Allen to respond to the allegations in his own New York Times op-ed.

“Of course, I did not molest Dylan,” he wrote.

Sarandon’s “The Last of Robin Hood”stars Kevin Kline as infamous swashbuckler Errol Flynn (at 48) and Sarandon as the concerned mother of a 15-year-old (Dakota Fanning) who is wooed by him. She was asked in the interview to comment about Allen’s new romantic comedy “Magic in the Moonlight” because its leads (Emma Stone and Colin Firth) are separated by 28 years.

Though Sarandon critiqued Allen’s real-life character, she was less concerned with the romances he puts in movies. “You know, films are great when they reframe reality and cause conversations and dialogue. I’m much more bothered by violence in film–especially violence that’s connected in some way to be sexy,” she said.

“I think [Dakota is] very mature,” she added, defending the May-December aspect of her own film. “And I think that Dakota plays her in a graceful, non-Lolita-ish way.”

“Magic in the Moonlight” opened on Friday and currently has a critics’ approval rating of 60% on Rotten Tomatoes.