Producer and star Mahershala Ali explains the difficult moral and ethical dilemma at the center of his new film “Swan Song” in an exclusive video featurette. “Swan Song is an amazing love story about two people who adore each other, but one of them – Cameron – is dying,” co-star Naomie Harris explains in the video.

“Cameron finds out about a technology to create a perfect duplicate of himself and leave this duplicate behind without his family knowing,” says writer-director Benjamin Cleary. “The film is all about the human elements,” Ali adds. “The love story, the sacrifice. Do I allow someone to take over my life? Love my child and my wife that is technically me, but it’s not me?”

That’s the conflict at the center of the story as Ali pulls double duty playing Cameron and Cameron’s duplicate. “Everybody will think, ‘What would I do in a situation like that? Would I love someone enough to die on my own so they would be spared the pain of my loss?’’ Harris adds, nothing the complexity of the question that’s central to the film, which also stars Glenn Close as the doctor who offers this alternative solution. 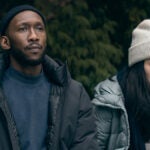 Watch the full featurette in the video above. “Swan Song” will be released globally on Apple TV+ and in select theaters on Dec. 17.