How far would we go to protect the ones we love from grief? That is what Benjamin Cleary poses in his new film “Swan Song,” starring Mahershala Ali, which got a new trailer from Apple on Thursday.

Ali plays Cameron, a loving husband and father who gets the worst news he could imagine: He has been diagnosed with a terminal illness. But before he can tell his pregnant wife (Naomie Harris), he is given an unbelievable offer by a scientist (Glenn Close) to spare his family from pain — replace himself with a perfect clone that holds all of his memories without his family ever knowing it.

Awkwafina and Adam Beach also star in the film, which Cleary wrote in addition to directing. Cleary previously won an Oscar for his short film “Stutterer” in 2016, while Ali is a two-time Best Supporting Actor Oscar winner for “Moonlight” and “Green Book.”

Producers are Rebecca Bourke; Adam Shulman and Jacob Perlin on behalf of Anonymous Content; Jonathan King on behalf of Concordia Studio; and Ali and Mimi Valdeìs through Know Wonder. 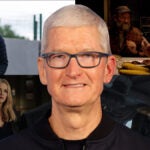 “Swan Song” will be released in theaters and on Apple TV+ on December 17. Watch the trailer in the clip above.