The 2002 romantic comedy “Sweet Home Alabama” ends predictably enough, with Reese Witherspoon’s character matched with the right guy — but the original ending to the film threw audiences a curveball that was so wild, it had to be completely reshot.

Witherspoon stars in the film as a successful New York fashion designer who returns to her small Alabama hometown to finalize her divorce from her husband Jake (played by Josh Lucas) and announce her engagement to a wealthy New Yorker named Andrew (played by Patrick Dempsey).

At the end of the movie (spoiler alert), Melanie’s wedding to Andrew is disrupted when it’s revealed she never signed her divorce papers. She calls off the wedding and heads down to the beach to plant lightning rods to create glass sculptures, where she confesses to Jake that she still loves him. The two return to what should have been Melanie and Andrew’s reception and have their first dance. Roll credits. Cue tissues.

But in the original ending, there was a fake-out that made audiences believe that Melanie died out on that beach. In an anniversary interview with Insider, it’s revealed that as originally shot, the ending found Melanie racing off to the beach where lightning strikes and it cuts to the wedding reception. Jake walks in holding an unconscious Melanie and announces to the room, “Melanie Carmichael is dead.” The guests are gobsmacked, then he says, “Long live Felony Melanie” and Witherspoon’s character pulls a Harry Potter, jolts awake and gives him a kiss. She was just jokin’ around.

“I don’t know why we thought that was really funny,” director Andy Tennant told Insider. “It was funny on paper and then when we shot it, when Josh says ‘Melanie Carmichael is dead’ and you cut to Mary Kay with that reaction that her daughter is dead it was just like, ‘Who thought this was funny?’ Apparently, I did.”

Tennant continued, “When we showed it to a test audience the whole room was just like, ‘What the f–k!’ The audience loved the movie up until that shot. Literally, Nina Jacobson, head of Buena Vista Pictures, walked up the aisle before the lights had even come up and said to me, ‘We’re reshooting the ending.’”

Lucas told Insider that he liked the original ending – “I thought it was funny and silly and weird,” he remembered – and was worrid when word came down that they were reshooting it. “It never bodes well when you hear you’re doing a major reshoot, but it worked out.”

Indeed, the film grossed $180 million worldwide and is a constant fixture of cable TV. 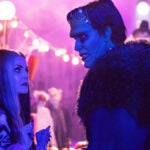