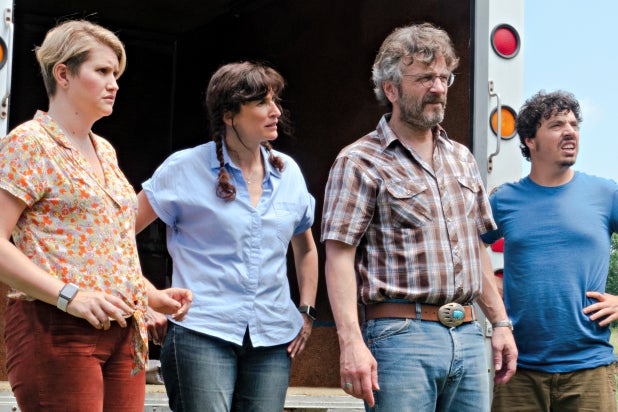 If ever there were a movie for our era, it is surely Lynn Shelton’s deceptively low-fi comedy “Sword of Trust,” which cheerfully skewers its targets even as it sweetly wears its heart on its sleeve.

The movie premiered at SXSW, and it’s safe to say Shelton is preaching to a pretty well-defined choir. If you connect to her liberal heroes, you’ll probably love the movie. If you favor her MAGA-fied villains, you’re more likely to write nasty comments about her on Twitter. Given that she’s thought out every other aspect of the project with acerbic intelligence, one suspects she’s prepared for this schism, too.

The divide that cleaves America is, after all, the film’s foundation. And its locus is a grungy corner of Birmingham, Alabama, where Mel (comedian/podcaster Marc Maron) — a wisecracking Jewish blues musician from New Mexico — runs a sleepy pawnshop that barely rises to the level of a purgatorial pit stop. But adventure arrives one day in the form of Cynthia (Jillian Bell) and Mary (Michaela Watkins), a lefty couple in town to collect Cynthia’s inheritance. Much to their surprise, her grandfather has left her a dusty old sword (they were hoping for his house). Furthering their chagrin, his will declares the sword absolute proof that the South won the Civil War.

Mel is as skeptical as the women, of course, but he’s also practical. And when it turns out that there are plenty of Confederate loyalists willing to pay big money for items that “prove” their revisionist view of history, he agrees to partner up. Together they’ll sell the sword and its dubious heritage, pocket thousands, and, who knows, maybe donate some of the money to the ACLU to ease their collective conscience.

But morally ambiguous plans have a way of falling apart, and the threads start to come undone as soon as word gets out about the sword. First, a pair of violent white supremacists storm into the shop and try to steal it. (“What is this, ‘Antiques Roadshow for Racists’?” Mel grumbles when he realizes how popular his weird new artifact is.) Then Mary, Cynthia, Mel, and his flaky assistant Nathaniel (Jon Bass, “Baywatch”) are thrown in the back of a truck by an angry stranger (Toby Huss) who goes by the name of Hog Jaws. When they emerge, they come face to face with a terrifying Tennessee kingpin (a funny Dan Bakkedahl) who collects Confederate relics and, apparently, as many guns as he can get his hands on.

Fortunately, our heroes have some unique advantages of their own: Cynthia is too naïve to register evil, and Mel is too cynical to be thrown by it. Plus, Mary was once in the Israeli army and currently carries around enough anger to knock anyone back. (Nathaniel contributes nothing but his own conspiracy theories, but he sells them well enough that you might briefly wonder if the Earth really could be flat.)

As with all of Shelton’s improv-inspired movies, the plot offers plenty of interest but the personalities provide the purpose. She chooses her actors very carefully and then lets them loose to explore, expand, or ignore the script (which she wrote with Mike O’Brien). And once again, after the successes of equally odd and moving films like “Your Sister’s Sister” and “Humpday,” she has created an opportunity for genuinely memorable collaboration.

All of the actors have their moments, including the friends who wander in and out of the film’s fringes. (Al Elliott plays a local diner owner, and Shelton is the drug addict Mel reluctantly loves.) It feels, at first, like a too-easy choice to make Cynthia’s wide-eyed innocence such a clear contrast to Mary’s sharp edge. But because Bell and Watkins are so in synch, their chemistry melds two opposing personalities into a sensible pairing. More broadly drawn are the cartoonish bad guys, who basically embody every Southern stereotype imaginable. This is a shame, because the other elements feel complex and thoughtful, even (and sometimes especially) during the film’s most shambling moments of mumblecore realism.

But the biggest draw isn’t the opportunity for righteous Blue Staters to feel validated. (Let it be noted that they get their share of digs, too.) It’s the chance to see Maron turn in what is simultaneously one of the most modest and striking performances of the year.

His longtime fans (including Shelton, his director on both “Maron” and “GLOW”) know that he’s got acting chops. But he grounds the lunacy around him so thoroughly, and with so much wry charm, that he turns out to be an ideal leading man. (Ever the unexpected overachiever, he even wrote and performed the film’s excellent blues-guitar soundtrack.)

Eternally irritated and existentially exhausted, Mel has no patience left for his country’s collective insanity. His disillusionment is total, yet Maron still finds room for a flicker of humanistic hope. An optimist might believe that even deeply disparate viewers will find a way to relate.