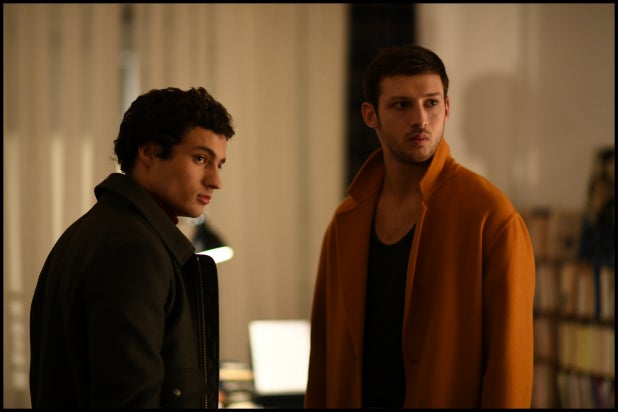 How much indulgence might you feel for a young man going through an existential identity crisis? “Synonyms,” the kinetic new drama from writer-director Nadav Lapid (the original “The Kindergarten Teacher”), is so wrapped up in the intense emotions of its millennial protagonist that tolerance becomes not only an expectation but also a requirement.

Though often surrounded by people, Yoav (powerful newcomer Tom Mercier) is also very much alone in his search for self-definition. He arrives in Paris after a traumatic stint in the Israeli army, to stay in a gorgeous but apparently abandoned rental apartment. His belongings are stolen immediately, which is particularly inconvenient since he’s just taken a freezing bath and is naked.

The chill nearly kills him, but his wealthy young neighbors, Caroline (Louise Chevillotte) and Emile (Quentin Dolmaire, “Godard Mon Amour”), find him just in time. They rescue him, in a sense, warming him up and giving him clothes and money. They’re also his first friends and tour guides, as he attempts to navigate a new country while extricating himself from his old one.

We quickly learn — because Yoav can’t wait to tell anyone who will listen, and even those who won’t — that he detests Israel and everything it stands for. His fierce antipathy consumes him to such a degree that he refuses to speak Hebrew even while he’s still obsessively learning French. This becomes especially awkward when he gets a job working security at the Israeli consulate, and contrasts notably with Yaron (Uria Hayik), a colleague whose neurosis takes the opposite route: He insists on broadcasting his ethnicity nonstop, and even joins an underground fight club between Jews and neo-Nazis.

Meanwhile the casually narcissistic Yoav moves from one job or relationship to another, continually flummoxed to find that each brings its own challenges. He takes Quentin’s apparent awe as his due, assuming that he fits in perfectly with slumming bourgeois artists who say things like, “If I knew I might never create anything fundamental and urgent, I might kill myself.”

Watch Video: Maggie Gyllenhaal: 'Kindergarten Teacher' Is What Happens When a Woman Is 'Starving' to Be Heard

And he accepts Caroline’s sexual overtures with equal confidence, even as he treats her just like the movie does: as someone who exists to be looked at and to look at him. It’s quite a shock, therefore, when he discovers the obstinate realities of nationalism and assimilation.

Lapid based Yoav’s story on his own experiences, which gives the film much of its depth. Though he doesn’t let Yoav off the hook, exactly, Lapid is clearly taken with both the character and the actor playing him. Each searches out his own route to liberation, with Yoav’s uncontrolled id perfectly matched by Mercier’s boundless energy.

Also Read: 'Tel Aviv on Fire' Film Review: Israel and Palestine Clash on the Set of a TV Soap Opera

Like Yoav, Lapid seems besotted by the symbolism of his location, infusing the film with a dynamic New Wave vibe that stretches from the central romantic triangle to the vibrant camerawork that insistently reflects Yoav’s internal life.

Filmmaker and subject also share a disdain for restraint, shouting and jostling to ensure we’ve gotten their point. But while their parallel passions aren’t exactly subtle, they do make their mark.