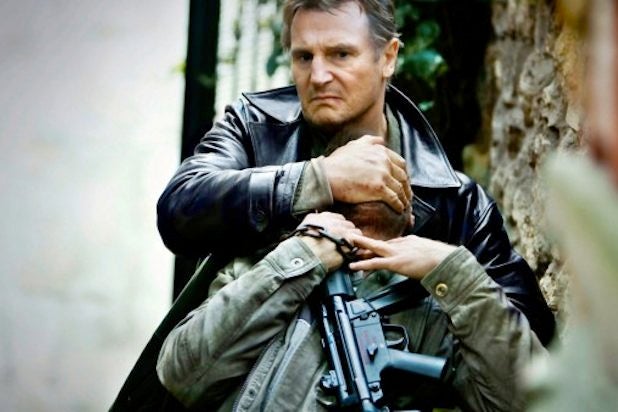 According to a popular expression, “third time’s a charm,” but “Taken 3” appears to be a third time too many for most of the critics who have offered up reviews so far.

And there haven’t been many, since the 20th Century Fox release wasn’t screened for critics — a studio decision that often foreshadows critical panning.

Still, the latest installment in the Liam Neeson action franchise is expected to dethrone “The Hobbit: The Battle of the Five Armies” from the top box office spot it has claimed for the last three weeks. But ticket buyers who are on the fence about seeing retired CIA operative Bryan Mills (Neeson) use his particular set of skills to save his family again do have a total of 18 reviews available at the moment, and 14 of them aren’t favorable, giving the movie a 25 percent “rotten” rating on Rotten Tomatoes.

TheWrap‘s Alonso Duralde has not been able to see the movie yet, but those who did used words like “preposterous,” “hackneyed,” “miserable” and “boring.”

The Guardian‘s Peter Bradshaw didn’t even offer up an opinion, but what he did write, along with the one star he gave it, suggests the movie played like a parody of itself.

“It’s difficult to know what subtitle to give this,” Bradshaw wrote. “Taken 3: Not Again, or Taken 3: Seriously? or Taken 3: This Is Getting a Bit Much Frankly.”

This time Forrest Whitaker joins the violent search party as a Los Angeles police chief in charge of hunting Neeson down when the aging hero is accused of murdering his wife, played by Famke Janssen. To make matters worse, daughter Maggie Grace is targeted by European crooks who want her dead, probably as revenge for the countless men her dad killed while saving her in the last two “Taken” movies.

See video: Liam Neeson on ’60 Minutes': Why The ‘Non-Stop’ Star Makes All Those Action Movies

“While it wraps up the adventures of Bryan Mills with a neat bow, ‘the third and final installment’ of the unexpected ‘Taken’ trilogy makes it official: both you and Liam Neeson are too old for this shit,” Plumb wrote.

Plumb probably quoted “third and final” because the very idea of a third “Taken” movie was mocked by its star.

Digital Spy critic Emma Dibdin seems to wish Neeson had stuck to his guns on that notion, because she described it as “a miserable blend of tin-eared soap opera and clunky action that feels infinitely longer than its 109 minutes.”

“The sadness inherent in watching the once-great Neeson reduced to this is the only emotional response that ‘Taken 3’ is likely to inspire,” Dibdin wrote. “An inert exercise in cash-cow milking, the film squanders its emotional stakes on a by-the-numbers revenge story that delivers on none of the modest levels that its predecessors managed.”

Robbie Collin, a critic for The Telegraph, was bummed that the movie seemed as if it was adapted from an entirely unrelated premise to fit the “Taken” mold, since “events here are wholly unrelated to the previous films.”

“Each individual moment in the film barely seems to be on speaking terms with the rest,” Collin wrote. “There’s a car chase out in the desert which might as well have been cut and pasted from a completely different movie: it takes the plot nowhere and ends with the chief henchman neglecting to check the wreckage of Bryan’s car for his body because ‘it’s time to get drunk,’ which might as well be a direct quote from the writers’ room.”

While it’s not popular opinion, TimeOut London critic Tom Huddleston thought “Taken 3” was an improvement “over its predecessor on almost every level.”

“The stakes are higher, the LA locations are nicely photographed and, best of all, there’s an actual plot, with twists and everything. The characters feel more rounded too,” Huddleston wrote.  “[Director Olivier] Megaton‘s epileptic, herky-jerky action sequences are still frustratingly hard to follow, and there’s never a pretense that this is anything more than easy product for an undemanding audience. But in this series, average is an improvement.”