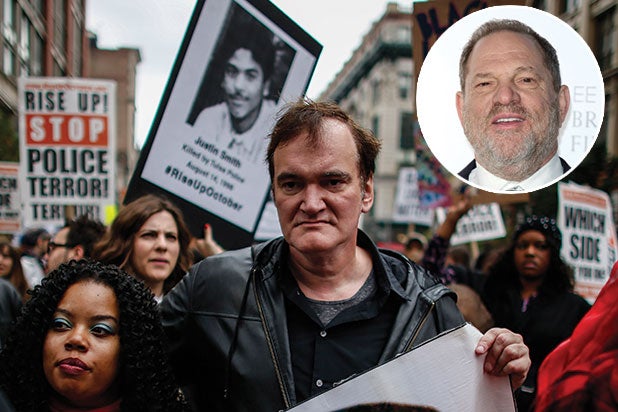 The consequences from Quentin Tarantino‘s nasty public beef with the NYPD may extend beyond his personal politics to the commercial and awards potential of his “The Hateful Eight,” distributed by The Weinstein Company, industry analysts told TheWrap.

Fallout from Tarantino’s participation in a Manhattan rally against police brutality comes at a most inconvenient time, as the studio attempts to position the director’s bloody Western as both a Christmas Day must-see and a major awards contender.

“The first concern in any kind of position where a film is being attacked by a group outside of Hollywood is not about awards, it’s about commercial impact. Everyone needs to make money,” said a top studio consultant, who spoke to TheWrap on condition of anonymity.

Indeed. It’s been a decidedly lean year for TWC theatrical offerings, as January’s “Paddington” was their biggest hit with $75 million in domestic earnings.

Both the New York police union and New York City Police Commissioner Bill Bratton hit out against the comments Tarantino made Saturday at the demonstration, wherein he referred to officers as “murderers.”

“There are no words to describe the contempt I have for him and his comments at this particular time,” Bratton said.

The backlash has prompted speculation that those sentiments could keep New York moviegoers — and police supporters nationwide — from seeing “Hateful Eight.”

“Quentin is not exactly George Clooney. He’s a not a person who divides the country with his well-informed opinions,” said the consultant, pointing out that audiences don’t look to Tarantino for guidance on social issues.

“Quentin is pretty much across the board larger than life. Harvey Weinstein could make the case his movies are outlets, and the violence is done as hyperbole. There’s no reason for them to come out and start talking… he should be stepping up and saying, ‘Don’t talk or apologize for me, let me get out of my own hole .'”

The Weinstein Company did not return TheWrap’s repeated requests for comment.

“Tarantino’s long-held cultural perspective on violence gives him an interesting space to speak on it. This feud resonates with his uber-fans and could drive others to see his film,” Ong said. “[He] should own his stance as always, he’s been in hotter water before. Courting controversy is a big part of his brand.”

Such behavior might be Tarantino’s stock-in-trade, but the controversy could make life unpleasant for Weinstein, who resides in New York at least part-time. Weinstein has upped his profile in the Big Apple over the past few years, pumping money into Broadway with “Finding Neverland” and tourism by backing Radio City Music Hall’s “Spring Spectacular.”

Not to mention the social position he occupies with Marchesa-designing wife Georgina Chapman. The pair are often fixtures at events like the Met Gala and political fundraisers hosted by the likes of Anna Wintour.

“You don’t want to walk around the streets of New York with a bulls-eye on your back for calling people ‘murderers,'” the consultant said.

Awards are also a notorious top priority for Weinstein and his company.

“The immense unlikability of various talent over the years never stopped them from getting nominated. Do they win? Not always, but they’re invited,” the consultant said.

“Weinstein is in a position to make a call for dialogue and discussion, possibly hosting a forum or other public event that recognizes and respects the union’s perspective,” she said.

“The Hateful Eight” will roll out in limited release starting Christmas Day.