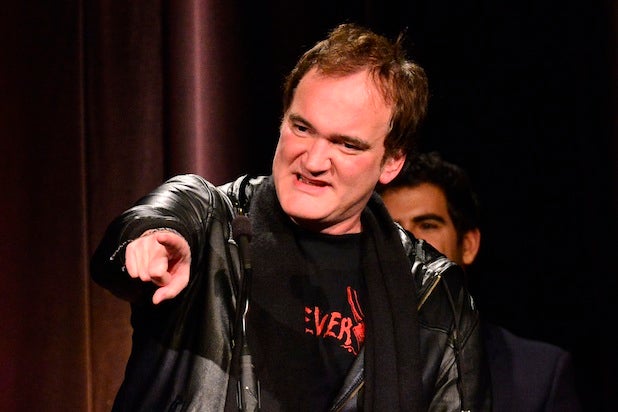 Quentin Tarantino will ride out to the old west again this winter.

The Oscar-winning filmmaker will begin production on his dramatically delayed post-Civil War western “Hateful Eight” in January, The Weinstein Company, which will distribute the film, announced on Wednesday.

The movie will be shot on 65mm film and boast the widest 70mm film release in over 20 years, with a 35 mm and digital release that follows. It will be produced by Richard Gladstein, Stacey Sher and Shannon McIntosh; Bob and Harvey Weinstein, along with G. Mac Brown, will executive produce the film.

This past January, Tarantino angrily announced that he would not make the film — his planned follow up to “Django Unchained” — when a copy of his script leaked onto the internet and was published by Gawker; he then unsuccessfully sued the site. After a live reading at the Ace Hotel in April, he decided to continue with the project, and a teaser and poster have already been released.

The script is an ensemble Western that, upon TheWrap’s review in January, had obvious parts for Michael Madsen and Bruce Dern (the two actors that Tarantino suggested may have leaked the script), as well as Tarantino stalwarts like Samuel L. Jackson and Christoph Waltz.

They run into a Southerner named Chris Mannix on the road, and three of them, along with their driver — a living prisoner and three dead bounties strapped to the roof — arrive at a haberdashery to take shelter from an oncoming blizzard.

We won’t spoil the rest, but it gets crazy.