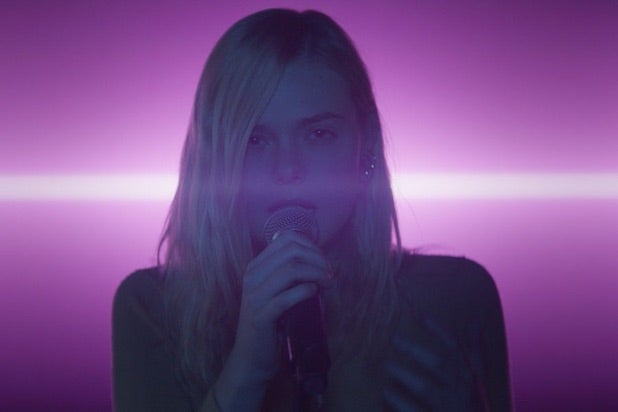 “Teen Spirit,” which premiered at last fall’s Toronto International Film Festival, has a scene in which our mild-mannered heroine, an aspiring singer Violet, performs a song with such verve and power that everyone who knows her is left with mouths agape.

They’re all thinking exactly the same thing: “We didn’t know she had it in her.”

And “Teen Spirit” might also have that effect on its viewers — because while we’ve seen great things in the past from Elle Fanning, who plays Violet, we’ve never seen her sing and perform like this. Like the characters on screen, we didn’t know she had it in her.

Fanning’s performance is one of the most surprising things about “Teen Spirit,” a goodhearted and entertaining film about stardom in the “American Idol” era that also marks the directorial debut of Max Minghella. The actor (“Bee Season,” “The Social Network,” “The Handmaid’s Tale”) is now following in the footsteps of his famous father, “The English Patient” and “The Talented Mr. Ripley” director Anthony Minghella.

But he’s not following in his father’s stately footsteps tonally or thematically. “Teen Spirit” uses songs from Tegan and Sara, the Undertones, No Doubt and others to craft a ragged musical that retains its charm even when it slides into slickness.

It’s one of a generous crop of musicals at TIFF this year, with Bradley Cooper’s “A Star Is Born” grabbing the lion’s share of attention but Brady Corbet’s “Vox Lux” also bowing on Friday after winning raves in Venice.

You could say that “Teen Spirit” is the latest in a string of terrific little indie musicals, or music-heavy indie films, that have come out in the last few years. John Carney’s magical 2007 film “Once” is the best of them, but more recently the list has included “Sing Street,” “Band Aid” and, so far this year, “Hearts Beat Loud” and “Juliet Naked” – and if you stretch it, you could include Ethan Hawke’s upcoming “Blaze” in that number as well.

(Meanwhile, “La La Land” and “The Greatest Showman” have made the top of the box-office charts safe for musicals, too.)

Minghella’s film feels glossier and less scrappy than most of those smaller films, because the production style of TV talent shows means its musical numbers have to be big and shiny. But with “La La Land” producer Fred Berger and music producer Marius De Vries on board, “Teen Spirit” knows how to add gloss without losing emotion.

Fanning’s character is the child of a Polish immigrant mother who is deeply religious and overprotective of her daughter; if Violet wants to sing, mom doesn’t understand why she can’t do so in their church choir on the Isle of Wight.

But Violet has other dreams, even though she initially seems timid and anti-social. So when a British television show, “Teen Spirit,” holds auditions on the Isle for the first time, she shows up (along with everybody else in her school, it seems) and is chosen to move on to the next round, a break that also requires her to enlist the services of a weathered local named Vlad who turns out to be a famous opera singer gone to seed.

Obviously, Violet’s path in a movie like this isn’t hard to figure out; she’ll advance, she’ll have setbacks, she’ll find an inner strength as the grand finale approaches. But Minghella, to his credit, makes it an entertaining ride even when we see where it’s going, and Fanning turns out to be a terrific singer well suited to the alternative-rock playlist she’s given.

We never see her with one of those big ballads so beloved of singing competitions — no “Hallelujah” or “I Have Nothing” for this girl — and that’s a good thing. And when Violet has given her final performance and it’s the moment of truth on several different levels, Minghella backs off rather than overplaying the drama, finding a gently affecting coda.

If you’re of the mind that thinks singing other people’s songs on television is not a very satisfying route to stardom (full disclosure: I am), Violet’s journey in “Teen Spirit” may not feel as momentous as the filmmakers intend. And with the U.S. singing shows failing to produce a real star for several years now, the film feels a little out of time; the route to pop stardom may have changed, though maybe we shouldn’t expect a teen from the Isle of Wight to realize that.

Still, this is not a film to quibble about — it’s a light and lively one to enjoy, and a blast of something new from the gifted Fanning.