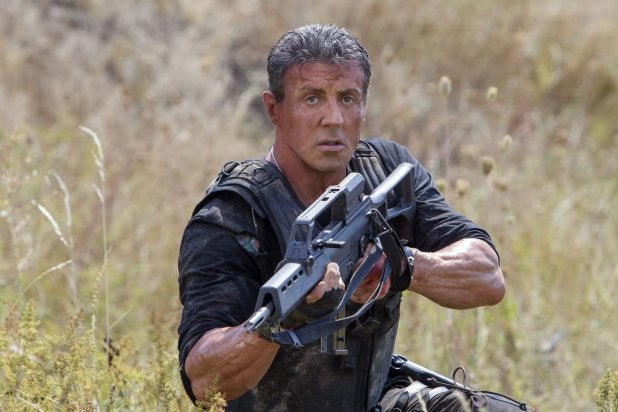 “Teenage Mutant Ninja Turtles” beat up “Expendables 3” to repeat as champ at the box office this weekend, and it wasn’t much of a fight.

Sylvester Stallone‘s not-so-bad-ass geezers didn’t pack much of a punch and wound up in fourth place at the weekend box office. “Expendables 3” came in behind Paramount’s “Ninja Turtles,” which took in an estimated $28.4 million, Disney and Marvel’s “Guardians of the Galaxy” with $24.7 million in its third week and Fox’s R-rated comedy “Let’s Be Cops,” which took in $17.7 million over the three days.

The weekend’s other wide opener, the adaptation of Lois Lowry’s teen novel “The Giver” from the Weinstein Company and Walden Media, finished fifth with $12.7 million.

Lionsgate’s “Expendables 3” had to have been hurt by the pirated copy of the film that hit the internet two weeks ago. The weak $16.2 million that it managed over the three days also shows how much the aging action stars’ box-office muscles have atrophied, and how the franchise has faded domestically. Lionsgate executives, who were still trying to assess how much the leak hurt, and with litigation pending, weren’t talking Sunday .

Also read: ‘Guardians of the Galaxy’ Tops $200 Million at Box Office in 15 Days

Harrison Ford, Wesley Snipes, Kelsey Grammer, Antonio Banderas and Mel Gibson joined a lineup that already included Arnold Schwarzenegger, Jet Li and Jason Statham for “Expendables 3,” which was rated PG-13 rather than the R of the first two films. But the opening is less than half the nearly $35 million that the original debuted to in 2010, and way under the $28.5 million that “Expendables 2” opened with in 2012.

That means the overseas box office, where the aging action stars still pack a punch, will have to be the saving grace for the $90 million sequel from Avi Lerner’s Millennium Entertainment. It brought in $15 million from 22 foreign markets in its first weekend abroad.

At least the U.S. audience that did show up — 61 percent male and 66 percent over the age of 25 — went home happy, and awarded it an “A-” CinemaScore.

It’s the fourth consecutive week that the overall box office has finished ahead of the comparable frame last year, and this August is on track to be the biggest ever. The summer is still running about 15 percent behind last year’s record-breaking total, but the upward trend is that the season’s dog days are encouraging.

“You have five different kinds of movies well over $10 million,” said Fox distribution chief Chris Aronson. “When you see that kind of diversity is when the business is at its best.”

“Ninja Turtles” is the only kids film in the marketplace and Paramount added 135 locations for a market-high 3,980 theaters, but it still dropped a steep 69 percent from last week. Michael Bay’s reptilian pizza-eaters have now wise-cracked their way to $117 million domestically, and $185 million globally in two weeks.

Disney and Marvel’s space romp “Guardians of the Galaxy” dropped just 41 percent from last weekend, despite being in nearly 400 fewer theaters. It passed the $200 million dollar mark on Friday, and with a $222 million overall total is on its way to overtaking “Transformers: Age of Extinction” as the summer’s highest-grossing film domestically. It added $33 million from overseas this weekend, and has taken in $418 million worldwide.

Also read: How Summer’s Comedies Stacked Up at Box Office

“Let’s Be Cops,” with Jake Johnson and Damon Wayans Jr. as fake police officers, has taken in $26.1 million since opening Wednesday. Given the raunchy comedy’s $17 million budget, that’s a win for Fox, and another score for a raunchy comedy in a summer that’s been filled with them.

Young men were the target audience for “Let’s Be Cops,” and Fox’s marketing connected. The crowd was 56 percent male and 54 percent under 25, and gave the film a “B” CinemaScore.

“The Giver” came in a little under expectations for TWC and Walden, which co-produced the sci-fi tale of a seemingly Utopian society. It stars Oscar winners Meryl Streep and Jeff Bridges, along with young Brenton Thwaites and Odeya Rush, and features Taylor Swift in a small role. The production budget was in the mid-$20 million range.

Two movies in their second week, “Into the Storm” and “The Hundred-Foot Journey,” were sixth and seventh. Warner Bros.’ disaster thriller brought in $7.6 million and is at $30 million overall. DreamWorks’ Helen Mirren foodie tale is at $23.6 million after falling off just 35 percent from last weekend with $7.1 million.

The Scarlett Johansson sci-fi tale “Lucy,” the dance film “Step Up All In” and “Boyhood” rounded out the top ten. “Lucy” is up to $107.5 million in its fourth week for Universal.