While the war of words over the imminent closure of the Motion Picture and Television Home hospital and long-term care center has been loud, messy and visceral, the grounds are nothing but tidy tranquility.
During an exclusive tour, an elderly resident zips around in her electric scooter-chair, and pauses to reflect on the controversy over the closure. “It’s sad,” she says. “It feels wrong.”
Officials from the MPTF opened the doors of the 48-acre facility for the first time last week to TheWrap, hoping to make clear why they find it necessary to close the hospital and long-term care faciility in a bid to preserve the MPTF’s other activities.
Today the Wasserman Campus remains a quiet oasis of cottages, a hospital, lawns and pepper trees in Woodland Hills, and it’s not hard to understand why its remaining residents and their families are fighting to stay. A stunt police car recently parked at the front entrance – and which some residents complained was meant to intimidate – has been removed.
Still, emotions are running high over the closure and many of Hollywood’s biggest names wait to see how this embarrassing chapter will end.
“No one with a connection to the home is happy with the decision (to close),” says Ken Scherer, CEO of the Motion Picture and Television Fund Foundation, referring not only to the affected residents, but to the fund’s board and the Hollywood community that supports it. “The whole process has not been fun.”
Scherer seems pained in general — and he admits that the police car was “not a good idea.” MPTF officials did not allow visiting Wrap journalists to speak to residents, who were notably few in number.  (Monday Update: an MPTF spokeswoman disputed that residents were barred from speaking to TheWrap; the strong impression left during the visit was otherwise. Photos of residents were explicitly banned, and no residents were present during the tour.)
The fund’s grounds reflect the dual personality of the campus. On one end of the property is the new, $18 million Saban Center for Health and Wellness, which opened in 2007 and features the Jodie Foster Aquatic Pavilion. The center, whose hallways are lined with photographs by Roddy McDowall and also boasts a state-of-the-art gym, a multipurpose room and administrative offices. Nearby stand the post-modern Fran and Ray Stark Villas.
At the other end of the grounds lie the home’s original studio and one-bedroom cottages, along with a residential lodge and Harry’s Haven, a 30-bed dementia unit. 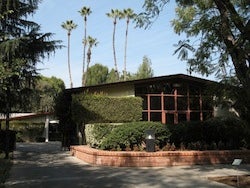 The MPTF hospital, a portion of which opened as recently as 1989, connects to the Jack Skirball Health Center (whose outpatient services, along with Harry’s Haven, are not closing). The state of California has ordered MPTF to earthquake-retrofit. The fund says this would be prohibitively expensive, estimating it would cost about $15 million.
And Scherer says the fund is now losing $1 million a month with the underused hospital remaining open.
What will happen when it closes?
The fund hasn’t decided what to do with the building, he said, although he’s quick to deny that it will be turned into apartments or razed for a parking lot.
“That’s a decision,” he says as we walk down a hospital corridor, “that will take place after we close the facility, take a deep breath and sit down to talk about it. Right now we’re too emotionally concerned with what to do with the patients.”
Sixty-six of them remain, and the fund has decided not to force them to leave, abandoning a plan to have them vacated by the end of October.
____
The backstory:
When the Motion Picture Home’s first buildings rose from an old walnut grove in 1941, the site was surrounded by the sparsely populated ranchland of the West San Fernando Valley. More publicly, the Motion Picture and Television Fund’s January decision to close the facility’s acute-care hospital and long-term care nursing home has resonated with concerns about America’s treatment of its rapidly expanding elderly population.
The resulting controversy has embarrassed major Hollywood philanthropists like Jeffrey Katzenberg, who chairs the MPTF foundation, and Frank Mancuso, who heads the MPTF board. Others include Michael Douglas – whose father set up Harry’s Haven as a tribute to his own father – and board trustees Edie Wasserman, Bruce Davis and Walter Mirisch.
The sudden MPTF closure statement said that the hospital and home were hemorrhaging money to the tune of $1 million per month. The fund claims these losses would bankrupt the fund in five years. The statement announced that steps were being taken to relocate about 100 long-term care residents to non-MPTF nursing homes. 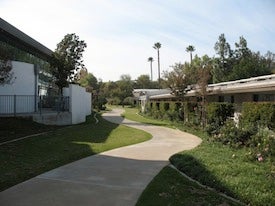 Shocked family members accused the MPTF of mismanagement and secrecy. At the heart of their allegations of betrayal was a belief that the fund had done nothing to prepare for its financial shortfall and that Hollywood was given no opportunity to come forward to save the home.
____
Not far from where we pause stands a vitrine holding a Torah donated by Steven Spielberg. At that moment we run into the Skirball’s medical director, Janice Spinner.
“I’m sad about it,” Spinner replies when asked about the decision to close the hospital.
Walking along the home’s shaded paths, past the midcentury communal buildings with their fireplaces and libraries, one sees the names that comprise Hollywood’s history plastered everywhere – Louis B. Mayer, Edie and Lew Wasserman, Ida Lupino and, of course, Mary Pickford, who started the home along with Douglas Fairbanks.
About 220 retirees on the grounds classified as independent-living residents are not affected by the closure.
The anti-closure activists have taken the fund’s motto, "Taking Care of Our Own," and named their organization Saving the Lives of Our Own.
Scherer points out that not all of the now-remaining 66 residents are holdouts, that a number are simply at the home awaiting beds to open up at other nursing homes. Originally the fund had hoped to have the home and hospital closed by year’s end, but Scherer says that is not likely, and the fund has had to renew its license to operate the facility for another year.
As residents resettle, they receive follow-up visits by MPTF social workers and can retain the same doctors they had on the Wasserman campus. MPTF nurses say they have prepared detailed reports to spell out the preferences of each transferring retiree.
Still, some people don’t want to leave, and they have their reasons. Their families don’t care to hear that the glittering $18 million Saban Center, with its immense swimming pool, was paid for by contributions that were specifically earmarked by their donors for this facility. These families want to know why this kind of money, even in a recession, could not have been raised to save the retirement home and hospital at the other end of the campus.
For its part, the MPTF is worried that the negative publicity will impact the foundation’s ability to continue to raise money.  “Media and blogs are damaging the home’s reputation,” Scherer says ruefully.
It’s an axiom of storytelling that the most riveting narratives are not fables about good vs. bad, but about good vs. good – the unintended, unforeseen struggle between two sides that are fighting for their vision of what is right. The MPTF believes by disturbing the tranquility of 100 retirement home residents, it is serving the greater good of preserving a fund that provides charitable and healthcare services to 60,000.
Saving the Lives of Our Own and its supporters equally believe they are right to challenge the scattering of their elderly loved ones.
____
With additional reporting by Sharon Waxman.
x