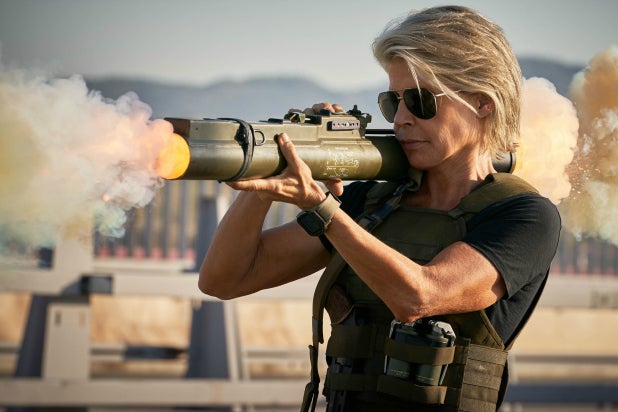 Humans hunted by robot drones. Refugees huddled in camps. Bodies invaded without consent. This isn’t the dystopian future the heroes are trying to avoid in “Terminator: Dark Fate,” it’s the dystopian present they live in. Tim Miller’s welcome, topical, action-packed sequel smartly overlays the sci-fi spectacle of James Cameron’s first two “Terminator” movies on top of a contemporary world which is, in its own way, just as harrowing.

The first two “Terminator” movies imagined a future in which an artificial intelligence called Skynet took over the world and nearly obliterated the human race. When a man named John Connor took back the planet, Skynet sent robot assassins back in time to kill his mother before he could be born, and when that failed, to kill him as a teenager, before he could become a soldier.

“The Terminator” and “Terminator 2: Judgment Day” spawned three sequels and a TV series of mostly disappointing quality, as various filmmakers tried to circumnavigate the franchise’s simple formula — a robot goes back in time, humans run from the robot with help from a friendly time-traveler and kill it in the third act — with twist endings and new timelines. Some were better than others, but now they’ve all been written out of continuity, so don’t worry about them anymore.

James Cameron is back producing the series, and so it’s of little surprise that “Terminator: Dark Fate” reverts to the old formula. A brand new model of Terminator called the Rev-9 (Gabriel Luna, “Agents of S.H.I.E.L.D.”) goes back in time to Mexico City, 2020, to kill a young woman named Dani Ramos (Natalia Reyes), who works at an automobile factory and — irony of ironies — is worried that robots are going to replace the human workforce.

Fortunately for Dani, she’s not alone: A cybernetically-enhanced human named Grace (Mackenzie Davis, “Halt and Catch Fire”) has also come back, to protect her from the Rev-9. But she’s got her work cut out for her, because the Rev-9 is actually two Terminators in one: an old-fashioned model, à la “The Terminator, coated in a liquid metal model, à la “Terminator 2.”

Fortunately for Grace, she’s not alone either. After a knockdown, spectacular freeway chase, they’re joined by Sarah Connor (Linda Hamilton), John Connor’s mother, who’s just as lethal as ever. To survive, Dani, Grace and Sarah will have to learn to trust each other, uncover the secret of the new postapocalyptic future that awaits them, and kill the most unkillable killing machine of all.

The script for “Terminator: Dark Fate” comes courtesy of five “Story By” credits and three “Screenplay By” credits (with an “and” and an “ampersand,” no less). That’s not usually a recipe for cohesive motion pictures with singular visions; “Dark Fate” is an exception to the rule. The film never feels like a nostalgia cash-in or a cut-and-paste job made by focus groups and committee. This story actually demands to be told, and it gets told with precision and skill.

“Terminator: Dark Fate” rewrites the future of the franchise (and, by extension, its past) by focusing entirely on the present. The journey Dani, Grace and Sarah take is complicated by contemporary obstacles like drones and metal-cage-filled detention centers along the Mexican-American border, where Grace is subjected to invasive medical procedures because the government lays claim to her body.

These aren’t the crux of the film’s plot; they simply emerge organically out of a storyline which was always about frightening over-reliance of technology, government and industrial overreach, and men trying to regulate a woman’s womb. The pieces of the original “Terminator” movies are still in place, but the world around them has changed, and our cultural conversations have shifted. It’s “Terminator” all over again, but the way “Terminator” would be told if it were made for the first time today.

It’s made with an incredible cast, of course. Reyes has a character whose arc parallels Sarah Connor’s and John’s, as she’s not only protected by action heroes but also forced to become one in her own right. Davis is stalwart and self-sacrificing, playing a character who seems a little thin until late-in-the-game revelations change our perception of her behavior. Her performance is already the stuff movie stars are made of, but the nuances may only come across in multiple viewings.

Linda Hamilton may not be the protagonist of “Terminator: Dark Fate,” but she’s certainly the star, returning to the franchise for the first time in nearly 30 years. She hasn’t lost a step in that whole time and looks just as comfortable firing rockets at robots as she does exploring the deep-seated pain inherent to Sarah Connor. Her rage and her nobility have sorely been missed in the “Terminator” series, and we are once again reminded that she has always been an exciting movie star who deserved a long, A-list career.

There are secrets to be discussed in “Terminator: Dark Fate,” one of which has already been spoiled in trailers and advertising: Arnold Schwarzenegger is indeed back, but to reveal how and why would be to ruin one of the film’s greatest pleasures. Suffice it to say he’s integral to the film, and he’s fantastic, but he doesn’t take any space away from the story’s true leads.

“Terminator: Dark Fate” can’t live up to the standard of the franchise’s groundbreaking visual effects, but to Tim Miller’s credit, he doesn’t seem to be competing with the past. Not every film can push the envelope the way “Terminator 2” did, so rather than striving to push visual-effects technology forward, “Dark Fate” focuses on updating a classic story with memorable characters and surprising depth. The film doesn’t quite have the breathtaking visual clarity of Cameron’s films, but the handsome cinematography by Ken Seng and clear, unobtrusive editing by Julian Clarke (both “Deadpool” veterans, just like Miller) are refreshingly classical by modern standards.

Whether “Terminator: Dark Fate” is the last chapter in this story or the first in an all-new franchise is, for now, irrelevant. The film works either way, bringing the tale of the first two films to a satisfying conclusion while reintroducing the classic storyline, in exciting new ways, to an excited new audience. It’s a breathtaking blockbuster, and a welcome return to form.