John Laroquette, who lent his voice to the narration for the original “Texas Chain Saw Massacre” (yes, the original film had “chainsaw” as two words), is coming back for next month’s “Texas Chainsaw Massacre,” some 48 years after the first film was released, TheWrap has confirmed. But as they say: the saw is family.

When the original “Texas Chain Saw Massacre” opened, it had a written crawl (pre-dating “Star Wars” by several years) and narration that was recited by Laroquette in the kind of hushed, gravelly tone of a courtroom reporter. It was meant to sell the seriousness of the movie, and its claims that it was based on a real-life case (it wasn’t really). It was the perfect place setting for the movie that followed, as visceral and gripping as any horror movie from that period (or any horror movie ever, really).

Laroquette returned to the franchise for 2003’s Michael Bay-produced “The Texas Chainsaw Massacre,” which looked to recreate the mood and setting of the original film while upping the explicitness of the horror. (Original cinematographer Daniel Pearl also returned for that iteration.) This new film serves as a direct sequel to the original, taking place in modern day Texas, where a new group of unlucky victims run afoul of Leatherface and, presumably, the rest of the murderous Sawyer family. This new film even features Sally Hardesty, the only survivor of the original film, who is name-checked in Laroquette’s narration (this time played by Olwen Fouéré, as original actress Sally Burns passed away in 204). 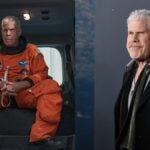 “It felt important to honor the original ‘TCM’ at every opportunity,” new director David Blue Garcia said to Variety. “John’s voice is iconic in the original opening and we thought it would help set the perfect tone in our own intro. It’s also a subtle way of letting the fans know they’re in good hands.”

How good those blood-splattered hands are remains to be seen. This new “Texas Chainsaw Masscre” hits Netflix on Feb. 18.