Deadpool, Bruce Banner and Gamora are all finally sharing a screen together — but not in a Marvel project. The first teaser for Netflix’s “The Adam Project” has arrived, teaming up Ryan Reynolds, Mark Ruffalo, Zoe Saldana and more in a time-traveling adventure.

In the movie, Adam Reed (Reynolds) is a fighter pilot who accidentally crash lands in present-day 2022. Of course, in the timeline of the movie, Adam was only 12 years old in 2022. Now, he must team up with his past self “on a mission to save the future.”

You can watch the full teaser for “The Adam Project” in the video above. 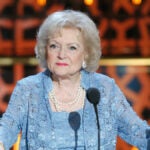 To be fair, it’ll take more than just one adult and his 12-year-old self to fix things. Adam has a partner, played by Zoe Saldana. He also needs to seek out his father, who’s played by Mark Ruffalo. Evidently, there’s a bit of drama in the family, as Adam’s mother (Jennifer Garner) notes that she misses him too.