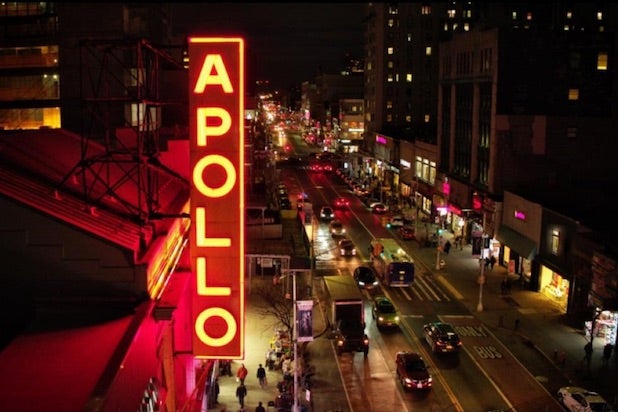 You’d think a documentary called “The Apollo,” about the famed theater in Harlem, would be focused on the extraordinary music that has been played in the venue for eight decades.

And you’d think that would make it an appropriate kickoff for the 2019 Tribeca Film Festival, which is heavily weighted with music-themed films of all kinds.

But Roger Ross Williams’ “The Apollo,” which premiered on Wednesday at, of course, the Apollo Theater, is sneakier and weightier than that. It’s got lots of music in it, of course, but at heart it’s not really about the music, or even the building in which it was played.

It’s really about community – and in these times, that inescapably makes it about politics as well.

Tribeca co-founder (and outspoken Donald Trump critic) Robert De Niro suggested as much in his opening remarks. “In these disturbing times, when the administration is promoting divisiveness and racism, we’re making a statement by being here tonight that we reject it,” he said.

And while the film was well received by the packed theater, by far the biggest reaction came with a clip of then-President Barack Obama’s appearance at an Apollo fundraiser in 2016, in which he crooned a little Al Green at the beginning of his speech.

Williams, the first African American to win an Academy Award for directing (for the documentary short “Music by Prudence”), bookends “The Apollo” with scenes from a staged reading of Ta-Nehisi Coates’ “Between the World and Me,” a fiery and eloquent examination of the legacy of violence inflicted on black people over the decades. That legacy hangs over the entire film, and positions the Apollo Theater not as a place for entertainment, but a place where African Americans can make a statement, assert an identity, form a community and occasionally find some healing through art.

At first glance, the theater, which first opened in 1934, feels like a cousin to country music’s Ryman Auditorium or opera’s La Scala – the mother church for an art form. But as the film makes clear, the Apollo was an essential showcase for jazz, for dance, for comedy, for hip-hop – it was a home not for one or two specific styles, but for African-American artistic expression through nine tumultuous decades. That scale means that a “and then James Brown recorded Live at the Apollo” approach would shortchange the subject.

So this is not a collection of music clips, though there are plenty of those. (It is not a slap at Williams’ movie to say that I sat in my seat in the center of the fourth row and thought about how I’d love to have been sitting in that same seat at a few thousand other nights in that theater.)

Instead, it is a meditation of African-American identity as manifested in a 1,600-seat theater on 125th Street in Harlem, and a sometimes lyrical, often angry portrait of what happened inside those walls and what it meant.

When the screening ended, singer Alice Smith did what so many had done before her on that stage: She brought the house down with her voice, singing “I Loves You, Porgy” and then roared through a fierce and riveting Nina Simone-inspired version of “I Put a Spell on You.”

And now that this year’s Tribeca Film Festival has kicked off with its own version of Showtime at the Apollo, it’s ready to screen documentaries on Linda Ronstadt, Michael Hutchence, Bill Wyman, D’Angelo, Trey Anastasio, Sublime, Blind Melon’s Shannon Hoon, the San Francisco Gay Men’s Chorus, the Charlie’s Calypso City and Other Music record stores and Woodstock, along with a batch of music-themed narrative films that will conclude with Danny Boyle’s “Yesterday.”

And it’s safe to say that the best of them will, like “The Apollo,” be about lots more than just music.