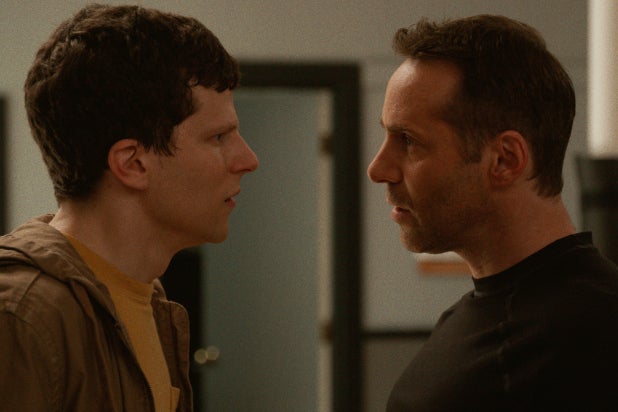 It’s been 20 years since David Fincher’s ultra-stylized “Fight Club” invited audiences to join its cult of shallow, stifled, macho insecurity, but times have changed. “Fight Club” was a warning shot, offering a vision of the near future in which toxic masculinity eventually formed a cult of personality and become indistinguishable from a terrorist organization. And it’s that world in which Riley Stearns’ similar but fiercely satisfying “The Art of Self-Defense” resides.

“The Art of Self-Defense” abandons the superficial artifice of pop brainwashing and instead portrays the world as it too often feels: lonely, muted, and completely devoid of purpose. Jesse Eisenberg’s protagonist, Casey, isn’t lured into a cult of psychological and physical violence because it has a sexy, MTV allure. He’s attracted to dangerous, disturbing people because they’re just ever so slightly more confident than he is. Or rather, they’re better at pretending they aren’t just as lost and pathetic as he feels.

Casey lives a quiet, isolated life with his pet dachshund. Every effort he makes to improve his station backfires completely. He learns French, but the only opportunity he has to use it is when two tourists mercilessly mock his appearance in their native tongue. He tries to ingratiate himself with the other men in the lunch room, but even their subpar posturing proves too thick for Casey to penetrate.

One night, while Casey is out buying dog food, a gang of motorcycle hooligans beat him within an inch of his life, sending him retreating to his drab home and afraid to go outside. When he finally emerges he stumbles across a local karate dojo, where the Sensei (Alessandro Nivola) talks a very big game. He promises to teach his students to punch with their feet and kick with their fists, and then he uses his martial arts abilities to describe how he’s going to rent a DVD later.

Completely smitten with Sensei, perhaps because he’s the only person who’s ever invited him to join anything, Casey signs up for karate classes. This new atmosphere of positive camaraderie isn’t just infectious, it’s nourishing, and so Casey keeps pushing — despite his inexperience and lack of talent — to insert himself into the dojo’s inner circle. Until finally, after revealing the trauma that motivated him to take classes in the first place, he’s invited to “the night class.”

Also Read: Alessandro Nivola in Talks to Star in 'Sopranos' Prequel 'The Many Saints of Newark'

Until this point, writer-director Stearns (“Faults”) has crafted “The Art of Self-Defense” like so many low-budget, independent comedy-dramas about lost souls who discover themselves after they pick up a new pastime. “The Art of Self-Defense” could have been a slightly more depressing “Shall We Dance,” or a significantly more depressing “The Full Monty,” and it would have been perfectly adequate either way.

But Stearns has other plans. The night class turns out to be a haven for real violence, and Sensei reveals himself to be a dangerously disturbed individual who manipulates, brutalizes and brainwashes his most promising students.

To reveal more would be to ruin the many surprises in “The Art of Self-Defense,” a film that somehow manages to shift its gears radically without making any serious deviations in cinematography or tone. Every genre shift gets filtered through the stark lens of Michael Ragen (“Kicks”), which drains the joy out of Casey’s self-discovery, the thrills out of the film’s fight choreography, and infuses even the funniest jokes with a well-earned weariness.

“The Art of Self-Defense” looks depressing because it’s a film about emotional low-points and the people who live in them. Eisenberg plays one of his many outsider weirdos, but he’s always good at making clear the distinctions between his (frequently similar) characters. As Casey’s confidence expands, he finds himself interacting with other people confrontationally, and yet he’s so unpracticed that he still sounds like he’s speeding through his affected dialogue at a table read. It’s simultaneously pathetic, hilarious, and frightening.

Imogen Poots plays Anna, one of Sensei’s pupils, who has infinitely more confidence than Casey but who has internalized so much of the dojo’s misogyny that she’s obviously dying from it. She’s trapped in a painful holding position, unable to find her self-worth without validation from Sensei and yet fully aware that she’s never going to get it. She’s convinced that if she works harder than any of the other students, he will eventually have to respect her, despite all the evidence and dialogue to the contrary. Literally, all of it.

Stearns’ film knows that everybody within it is doing something wrong, that the characters — and by extension, the audience relating to them — can all feel like desperate losers seeking the approval of our peers and superiors. “The Art of Self-Defense” concludes with an iota of hope, funneled through a disturbingly cathartic climax, but it leaves us in a place where the exploitation of the lost and troubled persists because it makes many people (oppressors and oppressed alike) feel like they’re part of a system. It’s a cynical world, but it doesn’t feel false and it doesn’t feel mass-marketed. It feels genuine and pointed.

“The Art of Self-Defense” is a bold and unsettling comedy masterstroke, as excitingly unexpected as it is uncomfortably familiar. It doesn’t fall into the trap of brainwashing the audience into buying its cult psychology before yanking out the rug; it completely recontextualizes even the most conventional and humdrum social systems, and challenges the audience to resist them, and to find new and increasingly nuanced perspectives. There’s nothing brave or funny about letting your fears transform you into a monster, but that doesn’t mean Riley Stearns can’t make a brave and funny movie about it. One that is, in fact, one of this year’s best.