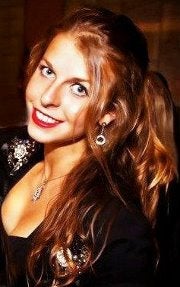 We field a lot of jacked-up press releases here at TheWrap, but this one wins the weekend, game, set and match.

A project announcement for horror-thriller “Psychotic” moved on PRWeb.com on Saturday, touting the casting of Elena Chernyakova (left), a former professional and collegiate tennis player who kicked off her acting career last year after graduating from Northwestern University.

And it is glorious.

According to the release, “Psychotic” has no script and is totally improvised — very much like its stab at a cohesive PR message.

Though the film has already started shooting in Chicago — they remind us of that twice in the first three paragraphs — it’s apparently still seeking financing, Kickstarter-style, but with no actual Kickstarter campaign.

The film’s website, which boasts a very retro early-90’s Internet listserv vibe (as well as two videos that “do not exist”), asks anyone to “please contribute at least one dollar or whatever you can afford and be a part of this movie,” enticing more generous donors with a newsletter subscription “at no cost” for donations of $5 and up.

But the press release itself is the best part. Read it for yourself:

The movie has already begun shooting in Chicagoland. The film is a about Jennifer & Michael, They Kill their friends and roommates and drink the blood of those whom they kill.

Starring Actor/Director/Producer Claude Reid & Model/Actress/ex-professional tennis Player Elena Chernyakov from Moscow Russia. This film is totally improv there is absolutely no script for the film. 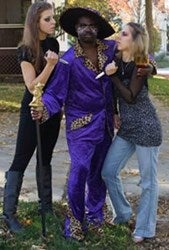 The feature film is about Jennifer and Michael, who are psychotic roommates who kill their friends and roommates and drink the blood of those whom they kill. They also have split personalities. Michael also travels do to his work in the music industry where he also kills during his travels. At the end of the film, it is discovered that some of the killings are a dream.

Actor/Director/Producer Claude Reid started off as an actor and became a Producer/Director as well. He learned Directing by working with professional established theater director Ernie Mclintock just before Ernie passed away. Ernie is from the South Side of Chicago & he moved to NYC to peruse his career, When Ernie moved to NYC he became more established, but when he got older he decided to move to a city that was more quiet and not as fast as NYC, so he decided to move to Richmond VA. Reid & Ernie met in Washington DC and they worked together in Richmond VA.

Elena Vladimirovna Chernyakova (born October 19, 1990) is an actress, model, and ex-professional tennis player from Moscow, Russia. She started her acting career in July 2012 after graduating from Northwestern University with a degree in Communication Studies, Business Institutions Program, and International Studies.

Male and Female actors as well as singers & dancers are strongly encouraged to submit their bio, important links to websites (such as youtube) and videos if available to nuconceptsproductions@gmail.com. The production company is still seeking Talent for supporting roles in the movie.

Producer/Actor/Director/DP/CM/Writer Claude Reid was skeptical about shooting with the sony a77 camera because everyone is boasting canon. He is very impressed with the still images and video this camera produces.

(H/T to ShockTillYouDrop’s @_RyanTurek, whose tweet brought this to our attention.)